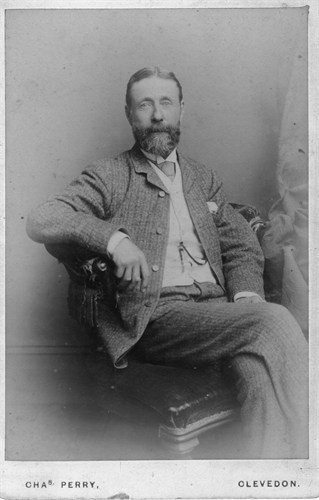 After swearing a marriage bond on December 30, 1858, Samuel, a Yeoman and bachelor aged 21 years, married Jane Wallis, a spinster aged 21 years, on January 4, 1859, at the Church of All Saints in Kingston Seymour, Somerset, England. (A yeoman is a landowner and farmer – a man who cultivates his own lands. Both Samuel and Jane’s fathers were also Yeomen.)

Samuel and Jane had 12 children in 19 years:

Firstborn son John was born on February 5, 1860, and baptized in All Saints Church on March 6, 1860 (the same day as his cousin Anna Maria Wallis, daughter of his mother’s brother William).

On the 1861 England Census, we find the family living on a farm in Kingston Seymour, England. Along with Sarah and John are two servants, Sarah Watkins and Olive Hovington. At a neighbouring farm, Samuel Wallis, a relative of Jane’s. It doesn’t say on the census, but Jane is pregnant.

The first record of James is his baptism on August 26, 1861. The entry suggests that the baptism was done privately, on a Monday, suggesting that perhaps the lad was born poorly.

In October, James died at just over one month of age and he was buried on October 2, 1861, at the Church he was baptized in.

As the year turns over, Jane is pregnant again and Wallis Griffin is born on September 22, 1862, and he takes his mother’s maiden name as his first. Wallis is baptized on October 19, just over a year after his brother’s death. (In later records, we find Wallis recorded as “Wallace”).

The year turns again and Alfred Griffin is born on August 31, 1864, and baptized on September 29th.

By the time James Bromley is born on September 15, 1867, poor Jane must be overrun by testosterone. James shares a first name with his younger (deceased) brother and likely because of that, he goes by “Bromley“. (He was remembered by his niece Dorothy (Griffin) Webb as “Uncle Brom.” James is baptized on October 16, 1867.

After six boys, the first daughter is welcomed into the family on March 2, 1870. Hannah Isabella Griffin is baptized on April 21, 1870.

The April 7, 1877 Weston Mercury reports that on Easter Tuesday, after adopting the parish accounts, John Wallis (unknown whether this is Jane’s father or brother) was renominated as the warden and Samuel Bird Griffin was re-elected on the part of the parish.

Samuel and Jane’s final child is their second daughter, Evelyn May. She is born in September and baptized on the 23rd. Less than six months later, the baby is buried on January 2, 1880.

The December 3, 1881 Weston Mercury gives an account of “The Ball at Brockley.” The ball was given by Mr. R.I. Jones at his residence on Brockley Court, to the tenantry on the Pigott estates and a few private friends in honour of the coming of age of the young Mr. Pigott. There were “something like” 200 guests invited, and they all attended. “The ball was opened by Mrs. Pigott and Mr. S.B. (Samuel Bird) Griffin and Mrs. William Gage and Mr. Cecil Pigott, who were the top and bottom couples in a set of quadrilles.” Among the ladies in attendance, Mrs. S. Griffin (likely Jane), Miss A. Wallis (likely Amelia, Sidney’s future wife), Mrs. Charles Griffin (Ellen née Gage), Miss Polly Griffin (possibly Isabella), Miss Goodland (likely Sarah Jane, John’s future wife). Among the gentleman, Mr. John Griffin, Mr. John Wallis, Mr. James Wallis, Mr. Wallace Griffin, and Mr. Edward Griffin. The article suggests that arrangements were made for the accommodation of guests who could not (or did not) dance, but that dancing was kept up with “unflagging energy” throughout the night.

On New Years Eve, the Western-super-Mare Gazette and General Advertiser reports on January 5, 1889, Samuel Bird presided over a “complimentary dinner” – the first of a series of annual reunions amongst the tradesmen and agriculturalists of Clevedon.

Samuel Bird died on October 28, 1890, in his hometown at the age of 56. A death announcement in the Bath Chronicle and Gazette on November 6th reads simply: “At his residence, Entmore, Clevedon, Samuel Bird Griffin, aged 56.”

An advertisement in the Weston Mercury on November 22, 1890, suggests that Samuel’s partner Charles Baker took over the firm “Messrs Griffin & Son Auctioneers & Valuers of Clevedon.” A probate record suggests that Jane was Executrix of his estate.

*Alfred and Sidney Griffin married their mother Jane’s brother John’s daughters Laura and Amelia Wallis (respectively) – their first cousins. Today, marrying your first cousin is legal in Canada, but it’s illegal in 24 US States and other parts of the world. Science actually suggests that the genetic risks of marrying your cousin and passing a genetic disease to your children are only slightly higher than the general population.

More on my Griffin Family

After being discharged from the Canadian Expeditionary Forces, John James Joseph “Jack” McPhail married Annie George. The couple had five children together. END_OF_DOCUMENT_TOKEN_TO_BE_REPLACED

William Alfred Webb married Louie Shepherd on December 31, 1904, in Bradford, Lancashire, England. They had five children, but only two survived to adulthood. END_OF_DOCUMENT_TOKEN_TO_BE_REPLACED

Isabella Griffin never married. She was the postmistress at the post office in Kingston Seymour, England. END_OF_DOCUMENT_TOKEN_TO_BE_REPLACED