At the time of her marriage, Ellen Longworth's address was listed at 32 Bolton Road in Chorley. In 1905, sister Joanna was living at number 36. 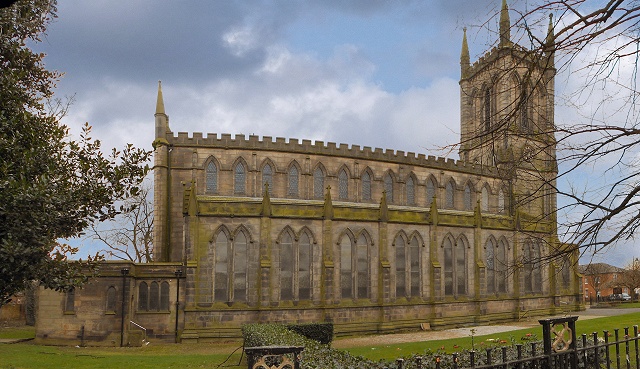 Ellen married James Cropper Ashworth on August 20, 1898, in at the Parish Church in Chorley, Lancashire, England. Witnesses to the marriage are Frederick Wilson and Jane Ellen Ashworth (James’ eldest sister).

When James Cropper Ashworth was born in June 1877 in Rawtenstall, Lancashire, England, his father, James Ashworth, was 26 and his mother, Mary (maiden name unknown), was 25.

They had four children over a span of 20 years:

Robert Ashworth is born March 7, 1899, the couple are still living at 32 Bolton Road. The child is baptized at Chorley’s St. James Church on April 16th.

We find the family on the 1901 Census at 21 Lincoln Street in Garston, Lancashire. An unexpected surprise—a “son”, born eight years prior to the couple’s marriage is on the census. On the 1891 Census, both James and Ellen are living with their parents—and there is no John Ashworth in either household.

A) The age listed for John is incorrect. But if that’s true, why doesn’t he appear on further censuses? Where is his birth registration or baptism?
B) John is adopted. Possible—but is John Ashworth his real name? Where is he after 1901?
C) The census taker screwed up or was given incorrect information.

Either way—the family appears with son Robert (aged 2 at the time of the census).  James‘ occupation is “mechanic fitter & turner.”

Son James follows in 1902 and daughter Mary Alice in 1905. Although baptismal records are available for these years at St. James (as well as the Blackrod parish where Isabella is baptized), no baptismal records have been located for these children despite a thorough review.

Isabella Ashworth is born on August 23, 1910 and is baptized in the Blackrod Parish on October 2nd that year. James’ occupation is described as a fitter.

On the 1911 census, John does not appear. Father, James, is a Millright in a Bleach Works. All of the children except Isabella (still an infant) are in school. The family is living at 102 Station Road in Blackrod, Lancashire.

James Cropper Ashworth died in July 1925 in Bolton, Lancashire, England, at the age of 48.

Ellen (Longworth) Ashworth died in September 1952 in Horwich, Lancashire, England, at the age of 76.

*Death dates for the children have not been verified—but have been suggested by a relative further down the tree. No marriages have were found for children other than James Jr., but Robert and his wife Sarah G. (maiden name unknown) are on the 1939 census.

After being discharged from the Canadian Expeditionary Forces, John James Joseph “Jack” McPhail married Annie George. The couple had five children together. END_OF_DOCUMENT_TOKEN_TO_BE_REPLACED

William Alfred Webb married Louie Shepherd on December 31, 1904, in Bradford, Lancashire, England. They had five children, but only two survived to adulthood. END_OF_DOCUMENT_TOKEN_TO_BE_REPLACED

Isabella Griffin never married. She was the postmistress at the post office in Kingston Seymour, England. END_OF_DOCUMENT_TOKEN_TO_BE_REPLACED