Leading Aircraftman Leonard Joseph Gray was killed in a tragic, preventable accident that led to changes in the way night flying is conducted in the military. 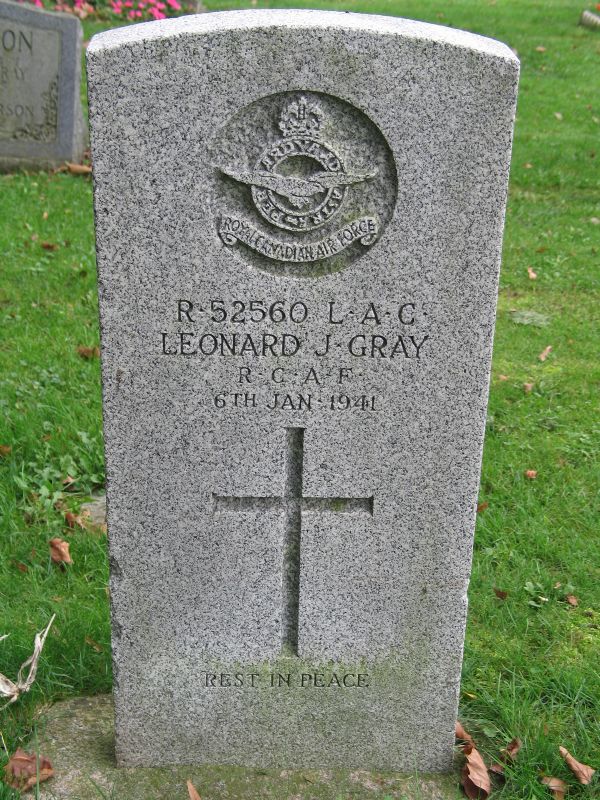 His military file contains confirmation that his birth record was viewed, but the record does not contain any information other than his name and date of birth. Library and Archives of Ontario advise that the registrations will be available for lookup in 2023.

Leonard was a member of the Royal Canadian Air Force during WWII. He registered with the RCAF Manning Pool out of Toronto, Ontario, regimental #52560. His military records indicate that he completed four years of high school and was working as a wireless operator at the time he enlisted. Leonard was also a Boy Scout – he’s on the Scout Association archive’s Second World War Roll of Honour.

Leonard’s military file is on Ancestry’s WWII Service Files for the War Dead (which are available to search for free).

The records indicate that Leading Aircraftman (LAC) Leonard Joseph Gray was “killed in [an] aeroplane crash near Wheatland, Manitoba, while on a night navigation flight” on January 6, 1941. He was 21 years old. I have located several articles detailing his death, and the Archives of Ontario have provided me with a copy of the inquest that was performed as a result. The records indicate that Leonard was on a night training flight with First Officer Michael Desmond MacBrian and Sergeant Gordon James Lewis of Toronto, Sergeant Edward John Pink of Winnipeg, Sergeant and James Duncan Ross of Assiniboa (Saskatchewan).

An article in the Winnipeg Free Press dated January 7, 1941 suggests that after taking off from the Rivers Air School, the plane failed to gain altitude and crashed almost immediately in an adjacent farmer’s field. Everyone on the plane was killed on impact. The bodies were badly burned, but neighbouring farmers were able to get them out of the wreckage. The fire brigade arrived within a few minutes but were unable to save the plane.

Inquest – Crash of Avro Anson AC No. 6016 at Rivers Manitoba

The photos that accompany the inquest play out what a horrific tragedy the accident was. A pile of wrecked metal, unrecognizable as a plane, is shown in a snow-covered field.

The results of the inquest suggest that the accident was preventable. After takeoff at 1905 hours, the aircraft immediately encountered low visibility at 100 feet due to a low lying and rapidly forming fog bank that reduced the horizontal visibility to nil. The pilot, First Officer Michael Desmond MacBrian, kept on low altitude below the fog and fired a flare to indicate his intention to make an emergency landing. After encountering some buildings, the pilot pulled the craft into a steep climb to the right, pulling the plane into the fog. He became confused and was unable to recover from the climb. Less than a mile from the school the aircraft stalled, pulling the starboard wing to the ground and causing the aircraft to crash at great speed.

The inquest suggested that there were five reasons that in combination led to the crash. First, a cloud height indicator had been installed at a building some distance from the hangar but had not been used that night. As well, weather reports which would normally be reviewed by the pilots were not received prior to take-off. Third, it was known prior to take-off that the plane’s instruments required for flying in low visibility were known to be unserviceable prior to take-off and the plane should not have been allowed to fly. Fourth, the pilot did not have enough experience to fly solely using the instruments and stayed below the fog to compensate. And finally, the officer at the school in charge that evening did not have the appropriate experience in night flying. A combination of all of these factors led to the deaths of five young men who had promising futures.

As a result of the inquest, changes were made to night flying procedures:

Leonard’s death is commemorated on page 31 of the Second World War Book of Remembrance and on the Canadian Virtual War Memorial. 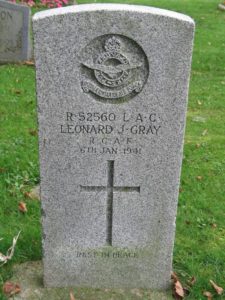 More on the Gardiner Family

Samuel Dutton, son of Edward Dutton, married Emma Podmore in Warrington, England. The couple emigrated to Canada and had one daughter. END_OF_DOCUMENT_TOKEN_TO_BE_REPLACED