Bromley Griffin married Elizabeth Emma Toop (Emma) on April 26, 1892, in at the Church of St. Quiricus and Julietta in Tickenham, Somerset, England. 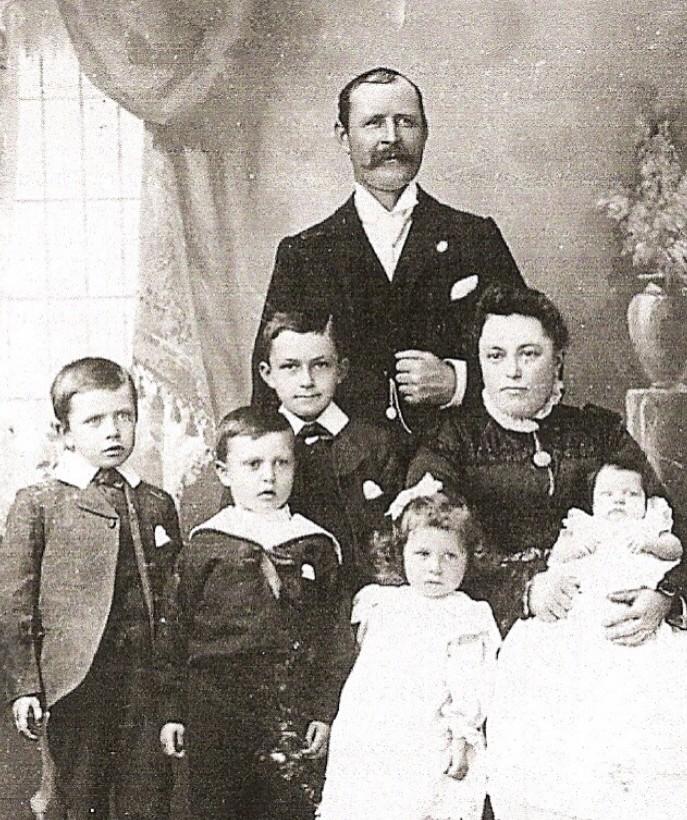 Bromley married Elizabeth Emma Toop (Emma) on April 26, 1892, in at the Church of St. Quiricus and Julietta in Tickenham, Somerset, England. The Banns were read three times in Tickenham Parish and in Bromley’s home parish in Backwell, England. At the time of the marriage, Bromley was a farmer.

James Victor (who named for his father, but goes by his middle name) is the name of the couple’s firstborn son on February 8, 1893. The child is baptized on March 26th in the couple’s home parish, St. Andrew’s in Backwell.

In short order, a second son, Edward Raymond is born in 1894. The child also goes by his middle name. Raymond is baptized on December 30th at the same parish church.

Thomas Hubert is the third son born to the family on June 6, 1896. Hubert is baptized on June 24th.

After three sons, the couple welcomes their first daughter on June 5, 1898, and the child is named for her mother and maternal grandmother, Elizabeth Beryl Louise Griffin (Beryl). The child is baptized on July 27th.

The couple’s last child is also a daughter, Edna May Griffin born March 11, 1901, and baptized on May 5th. The family photo above was likely taken in honour of that occasion.

In 1901, we find the family on the census living in Backwell on “Baptist Chapel Road” (now Chapel Hill). Also living in the home is Emma’s aunt Emma Parker, a visitor and a boarder. Bromley is (as we know) a farmer, and while some of the older boys should be in school, it is not noted on the census.

On June 23, 1910, James Bromley boarded the Royal Canadian Northern Steamship Royal George from Bristol, headed to Quebec, Canada. From Quebec, he headed to the Middle Lakes region of Saskatchewan. An obituary for daughter May suggests that son Victor had emigrated to Canada. Bromley’s trip may have been either to visit and assist Victor, or to prepare for his family’s eventual arrival.

I haven’t identified Bromley on the 1911 Canadian Census, but on the 1911 England Census, Emma is home alone with the children, still in Backwell. The address on the census suggests they live on “Hunts Farm” which exists on modern maps in Backwell on Chapel Hill. Victor is no longer living in the home. Raymond’s occupation is “Baker’s Assistant,” and Hubert is working on the farm. Beryl and May are in school and Emma’s aunt Emma Parker is still living with the family.

Emma died suddenly of a heart attack on December 27, 1912, in Nailsea, Somerset, England, at the age of 44. The location of her burial (if there is one) is unknown.

Bromley returned to England, and just over a year after Emma’s death, on daughter Edna’s birthday, he took the younger children to Canada. A passenger list for the vessel Lake Manitoba shows his return on March 28, 1913, to Newfoundland with Raymond, Hubert, Beryl, and Edna. The document lists him as a journeyman farmer, Raymond is a baker’s assistant and Hubert and Beryl are grocer’s assistants.

The entire family is however in Canada on the eve of World War I. Both Victor and Hubert enlist in the Canadian Expeditionary Forces, and both (thankfully) survive the war.

By 1921, Bromley is 53 and all of the children with the exception of Edna have flown the proverbial nest. Bromley and Edna are living together in Three Lakes, Saskatchewan. Bromley’s occupation on the 1921 Census is “farmer,” and Edna is not employed.

At some point after the 1921 Census, Bromley finds love again and marries a woman named Gertrude. Her birth name/location is unknown, but Gertrude was a year younger than Bromley, born in 1869. A specific record of the marriage hasn’t been found, but a photograph of Bromley and his new wife is sent in correspondence to Bromley’s nephew Arthur Bird Griffin, who also lives in Canada.

Back of photo is signed “from Uncle Brom and says it was taken about ten years prior and of himself, “the wife” and her grandchild.

Gertrude died in 1943. She is buried in Humboldt Public Cemetery.

Bromley died on January 12, 1944 in Saskatchewan, Canada, at the age of 77. He is buried with Gertrude in Humboldt Public Cemetery. His obituary suggests that all of his children survived him.

After being discharged from the Canadian Expeditionary Forces, John James Joseph “Jack” McPhail married Annie George. The couple had five children together. END_OF_DOCUMENT_TOKEN_TO_BE_REPLACED

William Alfred Webb married Louie Shepherd on December 31, 1904, in Bradford, Lancashire, England. They had five children, but only two survived to adulthood. END_OF_DOCUMENT_TOKEN_TO_BE_REPLACED

Isabella Griffin never married. She was the postmistress at the post office in Kingston Seymour, England. END_OF_DOCUMENT_TOKEN_TO_BE_REPLACED