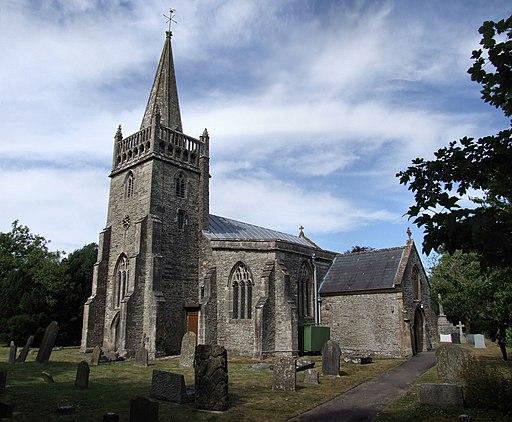 Sidney married Amelia Gage Wallis (his cousin) on March 31, 1902, at All Saints Church in Kingston Seymour. The wedding was witnessed by Amelia’s sister Ella and brother James Gage. Sidney’s occupation is “Grocer.”

In fact, two of Amelia’s sisters married two of Samuel’s brothers. Edith Wallis married Edward Griffin, and Laura Wallis married Alfred Griffin. As a result, all of their children would have had the same two sets of grandparents, making them “double first cousins.” In terms of DNA, double cousins are as closely related as half-siblings.

They had two children during their marriage.

Both boys were likely baptized, but baptismal records have not been identified.

In 1911, the couple is found on the English census in East Clevedon. Sidney (39) is a “grocer, corn dealer” and Amelia (41) is said to be assisting him in business. There is also a servant living in the household.

According to an article written by Wilfred Griffin in the Bath Times and Mirror on May 29, 1920, a cross bearing the inscription “In glorious memory of those from this parish who gave their lives for their country, and in honour of those who fought and suffered with them in the Great War, 1914-1919” was set in the square at Kingston Seymour. The cost of the memorial was born by public subscription, and Sidney was a force behind the collection.

On the 1939 Register, the couple is living at “Triangle House” in Clevedon, and both of their children are married and living on their own. Triangle House is now known as Bentham House (pictured below). Also in the home is Amelia’s unmarried sister Ella.

The couple is buried in the cemetery at All Saints in Kingston Seymour. The stone reads:

After being discharged from the Canadian Expeditionary Forces, John James Joseph “Jack” McPhail married Annie George. The couple had five children together. END_OF_DOCUMENT_TOKEN_TO_BE_REPLACED

William Alfred Webb married Louie Shepherd on December 31, 1904, in Bradford, Lancashire, England. They had five children, but only two survived to adulthood. END_OF_DOCUMENT_TOKEN_TO_BE_REPLACED

Isabella Griffin never married. She was the postmistress at the post office in Kingston Seymour, England. END_OF_DOCUMENT_TOKEN_TO_BE_REPLACED