The birth information for my great-great-grandfather suggests that his father's name was James Webb by his wife Sarah. It's more complicated than that. 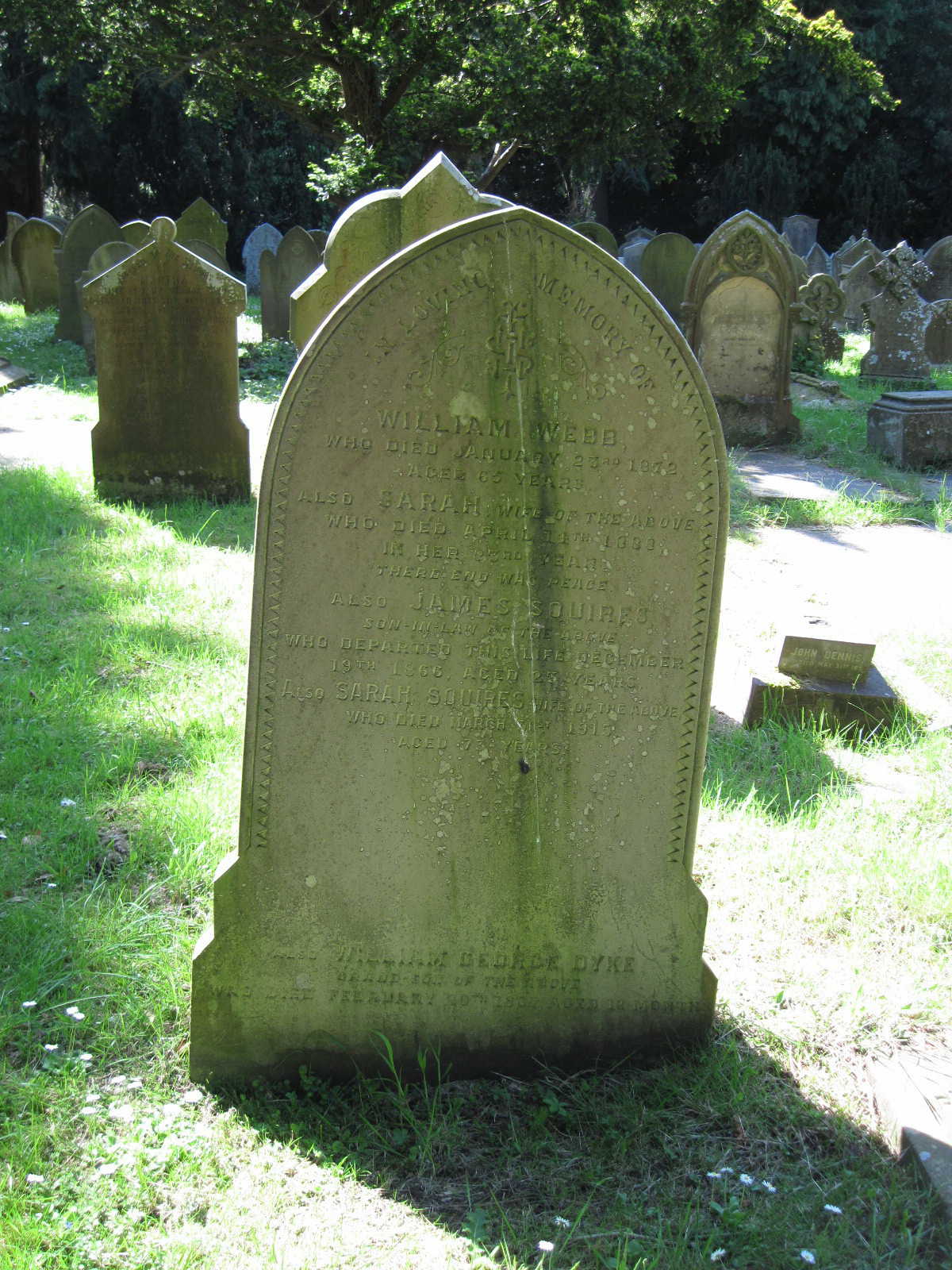 The birth information for my great-great-grandfather suggests that his father’s name was James Webb by his wife Sarah. For years, I was unable to trace a marriage (because of the common names) – but the discovery of his cousin’s wife living with William Richard Webb after he emigrated to Canada leads me to believe that there is no James Webb, and that William Richard was the baseborn child of Sarah Webb, daughter of William Webb (1807-1872) and Sarah (née Hawkins) (1806-1888).

Sarah did eventually marry a man named James—James Squires—and I’ve told the story of my research in as I discovered information about Sarah Webb’s nephew, Alfred Webb Dyke and his wife Effie. When William Richard is married in 1881, his father “James‘” job is listed as a Railway Inspector. William Richard’s stepfather, also named James (but Squires, not Webb), was a railway inspector.

The Life of Sarah Webb

Sarah appears to have had two children prior to her first marriage:

William Richard was born on June 5, 1859. The address is on his birth certificate is 9 Back Brooke Street, Chester. He’s baptized on April 15, 1860 at St. John the Baptist in Chester, Cheshire. The name of his father is not recorded on the baptismal record (and possibly the cause of the delay in baptism).

Alfred Thomas is also baptized at St. John’s, on February 24, 1861. The name of his father is not found on the record.

On the 1861 census, Sarah and her children are separated. Sarah is a servant living with William James Dixon, a merchant, and his large family which includes his wife Emily, son William, brother-in-law Thomas CB Westhead, sister-in-law Maria B. Westhead (his sister’s wife), and four servants,  Joseph H. Boyling, Gwynne Parry, Mary Roberts. The family is living at 13 St. John Street in Chester. Sarah is twenty years old and listed as a “nurse”. Given the closeness to the birth of her last child, it is possible she was a wet nurse to William Dixon who is 10 months old at the time of the census.

Alfred Thomas in 1861 is living with Thomas and Ann Povey at 4 Tarvin Road, Boughton, Cheshire (about a 20-minute walk from his mother’s employer). His name is listed as “Thomas”, and he is a “nurse child.” According to the article “Bastardy and Baby Farming in Victorian England” by Dorothy L. Haller, the term “nurse child” arose out of the Poor Laws in England. After 1834, all illegitimate children were the responsibility of their mothers, who were not able to apply for public relief. However, if the child was placed with guardians, the guardians could pursue maintenance of the child. Sarah would have been in a difficult position. With two illegitimate children, she would have been forced to work to provide for them or be sent to the workhouse. At least young Thomas appears to have escaped the fate of so many other children in similar conditions—who were abused, and sometimes killed by their carers.

James Squires was born in 1843, the son of Benjamin Squires, a labourer. At the time of the marriage, he was a soldier. This information, gleaned from his marriage certificate, is, unfortunately, all we know of James’ family, as his birth location is not captured in a census with his wife and children prior to his death and no military records have been located.

There were two children of the marriage:

Eleanor Squires (sometimes Ellenor) was born on February 17th and baptized at St. John’s on June 4, 1865. Both of her parents are named.

Sarah Eliza Squires was baptized at St. John’s on July 1, 1866. Both of her parents are named.

James Squires died on December 18, 1866, after only two years of marriage to Sarah. The story of his death was a tragic one, detailed in the Cheshire Observer and the Cheshire Chronicle on December 22, 1866, following an inquest into his death. It appears that James walked in front of a train and tossed onto the tracks. An engine passed over his shoulder and his foot, nearly cutting him in two. The inquest jury ruled a verdict of “accidental death.”(Note: A platelayer is a railway employee whose job is to inspect and maintain the permanent way of a railway installation. The term derives from the plates used to build plateways, an early form of railway.)

Sarah is widowed with four children on the 1871 Census at 38 Francis Street. The older boys are given their step-father’s name on the census. Sarah’s occupation is a Milliner Dressmaker. As described in Guide to Trade: The Dress-Maker and the Milliner, in the mid-19th century, there were two principal ways by which a woman may earn her bread – by service and by the needle. (Amusingly, the pamphlet also contains a warning against temptation…which apparently Sarah did not heed). The home appears to have been replaced by a tenement building.

Sarah managed to have three more children several years following James’ death. Like their eldest brothers, the father of the youngest three children is also unknown:

There are no baptismal records discovered for Sarah’s next two children, James Robert in 1872 and Emily, in 1874.

James is found in 1876 in school records attending Victoria Road School in Chester. His home address is listed as 34 Francis Street.

The 1881 Census finds Sarah with her three youngest children and her mother living at 61 Francis Street in Cheshire. Her occupation is again listed as a dressmaker. The census suggests that Sarah’s mother owns the home. Young Sarah Eliza is a domestic servant.

In 1891, Sarah and her youngest, Emily, are both dressmakers, still living in Sarah’s mother’s home (her mother passed in 1888).

In 1893, we find the first record of Gladys Squires on FamilySearch.org. Gladys was born September 22, 1893, at the home on Francis Street. Her birth mother’s name is listed as Agnes Maria Smith, a single woman, on her baptismal record. It’s unknown where Agnes came from, or where she went to after Sarah took Gladys in. She may have been a family friend, a servant, or possibly a figment of Sarah’s imagination to cover for an unexpected birth from one of her daughters (although given she doesn’t seem to give a fig about people knowing she has children outside of her marriage, I would be surprised if this were the explanation).

In the 1901 Census the child is listed as Mary Gladys Smith, Sarah’s adopted daughter. In 1893, she is Gladys Squires, living at 61 Francis Street, daughter of Sarah Squires, attending Boughton St. Paul’s School. A similar record is found in 1900 and 1903. On later records, Gladys is listed as the “adopted” daughter of Emily Squires and her husband Thomas Hughes.

In 1901, all Sarah’s natural children have left the home. Sarah is at the same address, still a dressmaker at age 48. Daughter Eleanor’s son, Ellis James Carman is living with Sarah, aged 12, possibly left to his grandmother’s care after his father’s untimely death. Mary Gladys Smith is age 7 and listed as “adopted.” The home also includes Richard Roberts, an 18-year-old lodger, William Evans (27) and William Symons (38) both listed as visitors.

In 1905, Gladys is still at the same school, but her address is listed as 66 Boughton, Cheshire (which is also where we find her sister Emily Squires with her husband Thomas Hughes on the 1901 England census.

By the 1911 census, we find Sarah has given up her home and is living with her daughter Emily (now Hughes) and her family. Mary Gladys Smith (now Gladys Squires) is also living with her in a four-room house at 64 Boughton, Chester. Gladys is an assistant in a shop. (As of the time of writing, there is an American Golf store listed at the address 62-66 Boughton in Cheshire).

Sarah Webb died on March 31, 1915, in Chester, Cheshire, England, at the age of 73, outliving her husband by 50 years (and three children) and was buried there with her husband and her father at the Overleigh Cemetery. The stone (main image) reads:

After being discharged from the Canadian Expeditionary Forces, John James Joseph “Jack” McPhail married Annie George. The couple had five children together. END_OF_DOCUMENT_TOKEN_TO_BE_REPLACED

William Alfred Webb married Louie Shepherd on December 31, 1904, in Bradford, Lancashire, England. They had five children, but only two survived to adulthood. END_OF_DOCUMENT_TOKEN_TO_BE_REPLACED

Isabella Griffin never married. She was the postmistress at the post office in Kingston Seymour, England. END_OF_DOCUMENT_TOKEN_TO_BE_REPLACED