If she’d lived this long, my grandmother, Dorothy Irene Griffin would have been 100 years old today. I’ve spent the past couple of days going through her old albums and thought I’d share some pics.

Gran was born while my grandfather, Arthur Bird Griffin was away at the great war (WWI). This picture with my great-grandmother, Lily (Moore) Griffin was taken to send to my grandfather while he was on the front.

And check out the baby gear…

Shortly after the war in 1922 (and likely while my great-grandmother was pregnant with my great-aunt), Arthur, Lily and Dorothy visited England. This is the only picture I have of my great-great grandmother, Sarah Jane Goodland.

I *think* this picture was also taken during the trip and it may picture my grandmother’s cousins with her, but it’s not labelled.

And this *may* be a picture of Dorothy with her grandfather, John Griffin taken in Weston Super-Mare, but it’s also not labelled.

My grandmother had two sisters. My Great Aunt Gladys was five years younger and Grace was ten years younger (she would have been ninety this year, but unfortunately passed last summer). Gladys and Gran were very close and lived up the street from each other for most of their married lives.

I think Gran is about 12 or so in the below family pic.

They had fun in the summer too.

This photo was taken as my grandmother announced her engagement to my grandfather, George Webb.

George and Dorothy made a handsome couple. This photo was taken at a friend’s wedding (Percy and Ella May Nutley) in Niagara Falls.

And children soon followed. Gran is pictured here with her grandparents Samuel Moore and Elizabeth (Longworth) and her children. 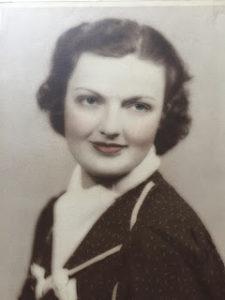 Her sisters grew up too.

And they still had fun as a family. Especially at the beach.

This is one of my favourite pictures of my grandmother and grandfather, taken on the Dundas wall on the way up the escarpment via Highway 8.

My grandfather died when he was my age – only 42. Dorothy raised her children with the help of her family and her friends. She worked at Minden’s Jewellers at the old Centre Mall in Hamilton and I can remember visiting her there when I was young. She always had a cigarette in her hand, loved playing cards (and she taught me how to play poker), and she also loved putting puzzles together. This is what I remember her like best.

She continued to have a close relationship with her sister, Gladys, who lived a block away. They would talk and visit almost daily after Gran retired.

After being discharged from the Canadian Expeditionary Forces, John James Joseph “Jack” McPhail married Annie George. The couple had five children together. END_OF_DOCUMENT_TOKEN_TO_BE_REPLACED

William Alfred Webb married Louie Shepherd on December 31, 1904, in Bradford, Lancashire, England. They had five children, but only two survived to adulthood. END_OF_DOCUMENT_TOKEN_TO_BE_REPLACED

Isabella Griffin never married. She was the postmistress at the post office in Kingston Seymour, England. END_OF_DOCUMENT_TOKEN_TO_BE_REPLACED