Taking the long way around my brick wall, I discovered my 3x great-grandfather through his cousin, after I found his cousin's wife. 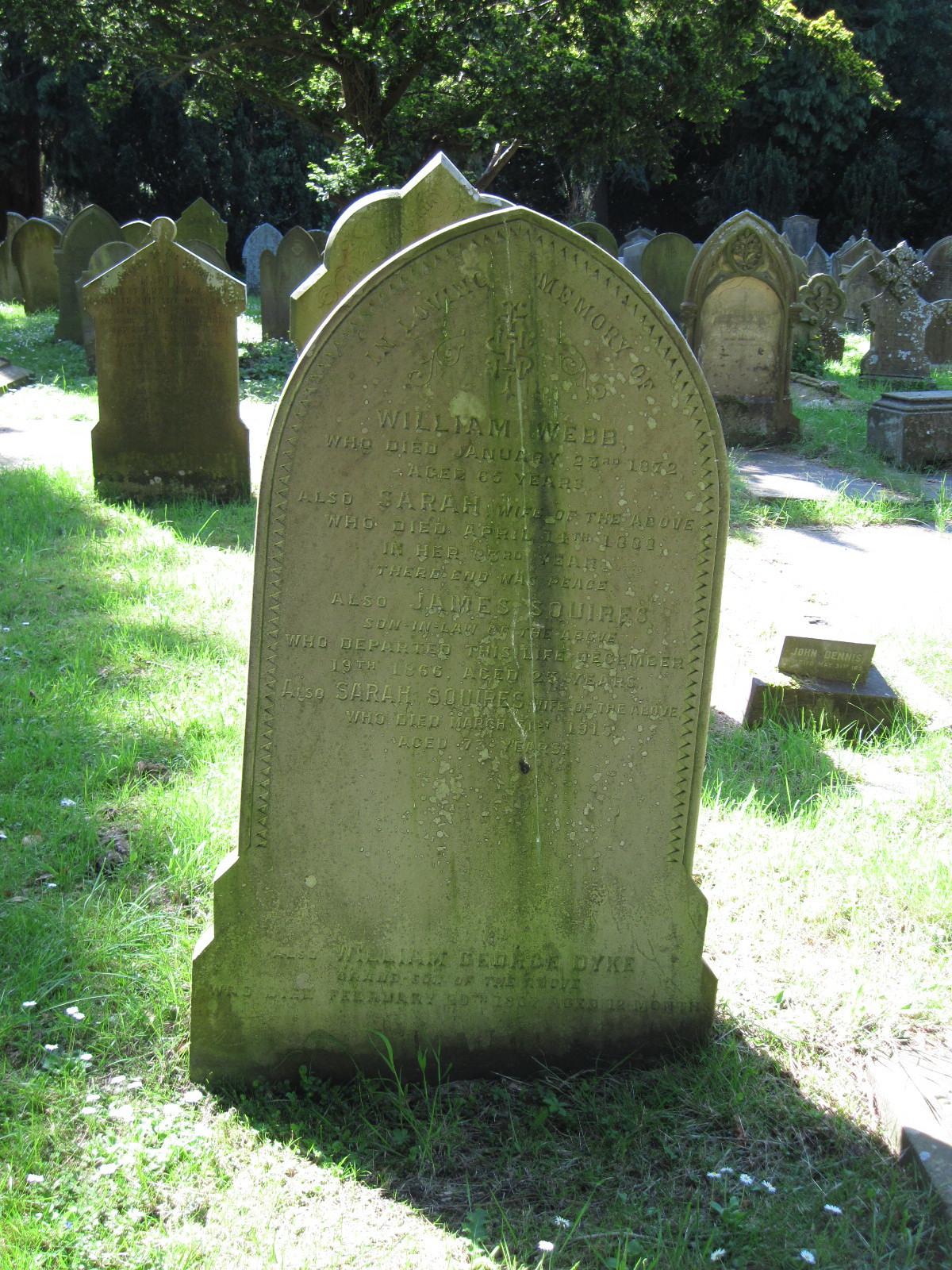 For years I’ve hit upon a brick wall as far as my great-great-great grandfather, William Richard Webb. I know that he lived in Cheshire, England. I “knew” from his marriage certificate that his father’s name was James. I knew that he and most of his children emigrated to Canada and that he and his wife are buried in Hamilton. (This is a lot to know really because when I started my research I had no idea that he’d emigrated.)

But I’d never been able to trace beyond William Richard and his father James in Cheshire, mostly because there’s a lot of William and James Webbs in Cheshire. And that’s probably still true today – Webb is at least as common a name in Cheshire as Smith is in North America.

I’ve been on again off again with my research, and I delved into the Webb family with my latest rush. The 1921 Canadian census shows a woman named “Effie Dake” living with William Richard and Elizabeth (Dutton) Webb. Her relation to the head of the household (William) is listed as “cousin”. But she was born in 1886 in Scotland which would seemingly preclude her being a relation as William and family all hail from England.

I did attempt to research this at an earlier date but to no end. But with my most recent jump back in, I thought I’d have another look.

A search of the database for Effie Dake (which is an unusual name, so I was hopeful for a result) turned up a border crossing manifest which clears up the mystery (a bit anyway). “Effie Dake” is actually Effie Dyke. But she is not William Richard Webb’s cousin.

Effie’s husband Alfred Dyke, a 38-year-old structural iron-worker, is listed on a US-Canada border crossing document as going to visit his cousin William at his Wellington Street address (so definitely the right family). Alfred and Effie are joined by their young son William, age 6. This border crossing happens on Christmas Eve in 1919, but Effie’s 1921 census record suggests that she entered Canada in 1911. Perhaps this was just a quick cross border trip?

Further search on Ancestry with Alfred’s name reveals he was a Canadian soldier in WWI and was born in England. So Effie and Alfred had been in Canada for a while. And what’s that? On his attestation, Alfred lists his middle name. It’s Webb! And not only that, his military records name Effie as his next-of-kin, so it’s definitely the right Alfred.

So, if they are cousins, Alfred and William’s parents *might* be siblings. And given Webb is Alfred’s middle name instead of his last name, it is possible that William Richard’s father’s sister is Alfred’s mother. So more digging to be done.

A little more research finds Alfred’s family in Cheshire, England (which is where William Richard Webb’s family is from). And his father, Edwin Henry Dyke, is a railway inspector (which is one of the jobs that William Richard had before he left England). I trace the family with 7-8 children back on the English censuses. I can trace them easily from 1911 all the way back to 1871.

So I take a runner – Alfred’s mother has an uncommon name – Selina Charlotte. I enter the last name “Webb” into the Ancestry looking for a marriage and hit search. And BINGO.

My search also reveals Alfred was not always Alfred “Webb” Dyke. His birth and baptism information have him as Alfred “James” Dyke. Was he named after William’s father? Did he assume the name Webb to endear him to his newly Canadian family? Did he borrow it from his brother who was William Webb Dyke? Or was it to shake of his ex-wife (who I’ve also discovered in the course of this research in Alfred’s digitized service file…and wow, that will be an interesting story I can add to the tree).

Moving farther back, I find the 1851 and 1861 English censuses with Selina Charlotte before she married. Again, because of the uncommon name, her year of birth, and the fact that I know her father is William Webb, I can trace the two together. And (bonus), Selina’s eldest daughter Rosina Dyke is living with her grandparents at 61 Francis Street in Chester (which is the same address as listed in the probate record below). I discover that Selina’s mother was Sarah. Will a search for William and Sarah’s marriage certificate turn up the link?

I manage to find William’s gravestone – which thankfully has several family members at rest, and I can link back to the Dyke family to make a clear link.

From this, and the censuses, we can confirm Selina’s father William’s year of birth as 1807, and her mother Sarah as 1805. The William George Dyke named on the stone is Alfred James (Webb) Dyke’s brother, Selina’s eldest child.

Probate for William in June 1872 doesn’t reveal his parentage or any other clues.

But where is the elusive marriage registration? Did William marry Sarah Hawkins? Will that tell me who his parents are and lead me back to the elusive James and William Richard? Only time will tell, unfortunately. But on the bright side, I have a lot more digging to do.

After being discharged from the Canadian Expeditionary Forces, John James Joseph “Jack” McPhail married Annie George. The couple had five children together. END_OF_DOCUMENT_TOKEN_TO_BE_REPLACED

William Alfred Webb married Louie Shepherd on December 31, 1904, in Bradford, Lancashire, England. They had five children, but only two survived to adulthood. END_OF_DOCUMENT_TOKEN_TO_BE_REPLACED

Isabella Griffin never married. She was the postmistress at the post office in Kingston Seymour, England. END_OF_DOCUMENT_TOKEN_TO_BE_REPLACED