Alfred James Webb Dyke was a war hero - with a checkered past. 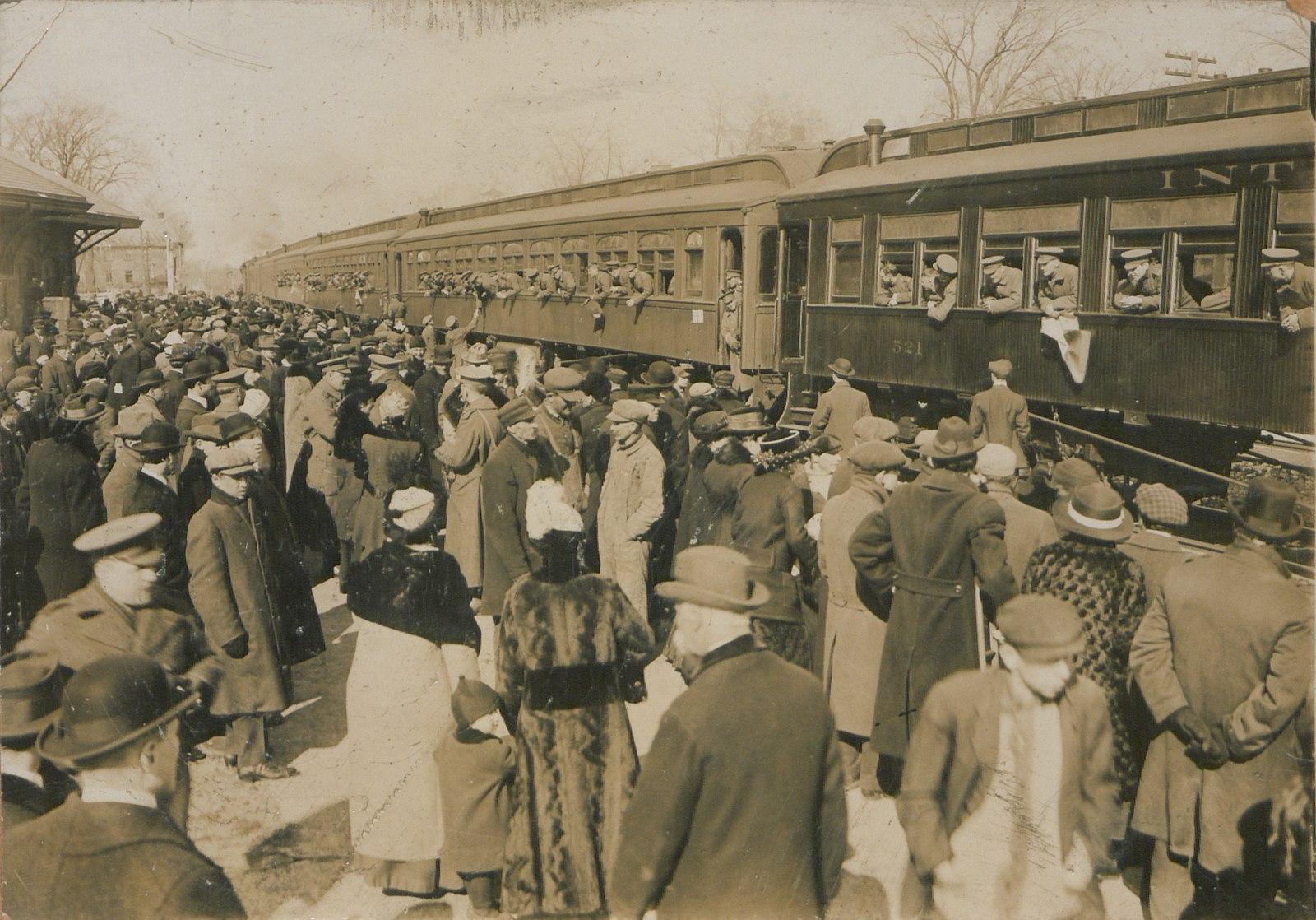 Updated January 16, 2020 to include potential info about a second bigamist marriage.

This is one of the more complicated branches of my family tree, with a separation and possibly not a divorce prior to remarriage, a tragic death, and another remarriage (to someone who was already a widower) and four children, all with intermixed relations—two each shared a mother and two of those (but not the same two) had the same father.

Alfred married Ellen Atkins on March 1, 1900, at Christ Church in Cheshire. At the time of the marriage, Alfred is living at 22 Oak Street and Ellen is living at number 30. Alfred’s brother William Webb Dyke is a witness to the wedding.

They had two children together:

Their first child is born on September 7, 1900, barely seven months after their marriage. Harold Henry Dyke is baptized at Christ Church, the same church where his parents were married, on September 29, 1900. The record suggests that they are living at 30 Oak Street (there aren’t homes in this area anymore). Alfred’s occupation is listed as a Boilermaker. Given his family’s history in rail, it’s likely that he also works in the industry.

Although they were married in 1900, Alfred is not in the same household as Ellen at the time of the 1901 census. Ellen and Harold Henry are still living at 30 Oak Street. It appears that the home is owned by Ellen’s sister Elizabeth Huddleston.

Alfred is shown on the same census living with his parents on Ludford Street.

On March 29, 1907, the couple has a second child, Florence May Dyke. She’s baptized at Christ Church on May 5th. The family is living at 153 Market Street. Alfred is a Plater—a railway employee whose job is to inspect and maintain the permanent way of a railway installation.

Ancestry pulled up a record suggesting that an Alfred James Dyke was imprisoned for three years for bigamy.

A review of newspaper accounts confirms that it’s the same Alfred.

This article in the Crew Chronicle on July 20th suggests that another woman came forward suggesting that he’d proposed to marry her as well.

A marriage registration that appears to match most of the details in this article was also located. “Montague” Alfred James White married Maud Ashton in Reddish on June 25, 1907 (the date of the offense).  Interesting – he has not named his father, and the record also suggests that his new bride believes him to be a “structural engineer.”

So it’s not surprising that we find Ellen and Florence are living at 160 Gresty Road in Crewe, boarding in the home of Charles William Hotchkiss with her father, George.

There is a Harold Dykes in the home of Caroline Harrop at 13 Broughton Road in Crewe on the same census. He’s listed as adopted and the age (10) is correct. If this is the correct Harold, it appears that Harold Henry followed Alfred’s family and was eventually employed in the railway (railway records show him working at the young age of 14).

Alfred James Dyke was imprisoned from December 9, 1908 until October 12, 1909. At the time of his release or shortly thereafter, he moved to Canada.

Our Alfred registered with the Canadian Expeditionary Force in July 1915. Although his criminal record could technically have prohibited him from enlisting in England, he may have gotten around that requirement by leaving the country and not disclosing it in Canada. It is also noted that further documents from this time refer to Alfred as “Alfred Webb Dyke,” hinting again there was a need for a name change.

Alfred’s next of kin in his paperwork is listed as “Mrs. E. Dyke” living in Fort William, Ontario. We learn through his military records that this does not refer to Ellen, but instead to Euphemia (Effie) Stewart McCubbin.

The records suggest that Effie and Alfred were “married” in 1913 and had one son together.

Alfred was 5’5″ tall with dark brown hair, brown eyes and a dark complexion. His medical records found him to be fit for service and suggest that he was active in the local militia in Fort William (which may explain why I couldn’t find him in England on the 1911 Census, but doesn’t explain why I didn’t find him in Canada). A will, signed October 6, 1915, leaves all of his property and effects to Effie, who by this point is living in Scotland with her father. The records suggest that a marriage certificate was produced, but I was not able to locate one either in England or in Canada. Despite his troubled youth, it appears Alfred redeemed himself. He rose to the rank of Sergeant.

Sergeant Dyke was demobilized and discharged on October 30, 1919. There are border crossing records that suggest that Effie, Alfred, and William crossed the border into Detroit, Michigan, on December 6, 1919. The family appears on the 1920 census renting a home at 242 Annin Street in Detroit.

The records show Effie living at 150 Dundurn Street in Hamilton, and then at 1041 Canon Street East in Hamilton, and show his eldest son Harold Henry Dykes on Rainow Road in Macclesfield, Cheshire. This record suggests that Ellen was shown to be of “dissolute character,” which suggests that the army did not look too deeply into Alfred’s past. The record suggests that Ellen’s daughter Florence was not Alfred’s daughter, although the were legally married at the time of her birth, and she appears to have taken Alfred’s last name.

Although his marriage to Effie was illegal, the will was eventually executed in her favour anyway, and she received a pension after his death. His eldest son (by Ellen) was given his father’s war medals. Given this information, we’re forced to conclude that the Alfred James named in the prison documents was likely NOT our Alfred James.

Alfred was given a full military burial in Hamilton Cemetery.

That was a lot, right? But I’M NOT DONE YET.

After Alfred’s death, Effie is found living in the home of his cousin, William Richard Webb at 85 Wellington Street. The military records suggest that the family may have been living there around the time of Alfred’s enlistment, and given the burial was in Hamilton, it makes sense that she would return there. (You’ll recall that the 1921 census record is how I broke through my brick wall with William Richard.)

At the time of this census, there’s a boarder also living with William Richard named Frederick Potts.

Frederick was born in Lancashire, England on November 28, 1884. when his father, Laurence Potts (1853-?), was 31 and his mother, Martha (nee Lightfoot), was 31. He emigrated to Canada arriving in Quebec on the Virginian on June 30, 1911. Frederick married a woman named Elizabeth Rae Love (who, like Effie, was from Scotland) on August 21, 1913. It doesn’t appear that the couple had any children.

Frederick had been living with William Richard since at least June 4, 1919, when Elizabeth died (he’s listed at that address on her death certificate).

I don’t know where Effie’s son William Webb Dyke is in 1921, but it becomes clear that a romance blossoms at the Webb house. On January 23, 1922 (less than a year after Alfred’s death), Effie marries Frederick Potts. His occupation at the time of the marriage is Millwright, and hers a housekeeper.

They had one daughter together (who is completely unrelated to me, but for completeness, I’ve included her anyway).

I haven’t been able to trace Ellen beyond the military records after Alfred’s death. It’s possible she remarried, or that she also emigrated. Harold Henry appears to have continued living in Cheshire, and Florence May is also untraceable so far. No marriage record has been found, and neither mother nor daughter appears on the 1939 Register.

So…to sum up. Wow. I’ve made a chart so you can keep track.

Main Image: “The farewell.” [per label at Queen’s University Archives, this is the 22nd Battalion CEF leaving St. John’s, Quebec, in 1915.] (Source Wikimedia)

Samuel Dutton, son of Edward Dutton, married Emma Podmore in Warrington, England. The couple emigrated to Canada and had one daughter. END_OF_DOCUMENT_TOKEN_TO_BE_REPLACED