I found this fantastic postcard amongst my grandmother's photo albums. My great grandfather, Arthur Bird Griffin is on the left behind the big guy in the front. 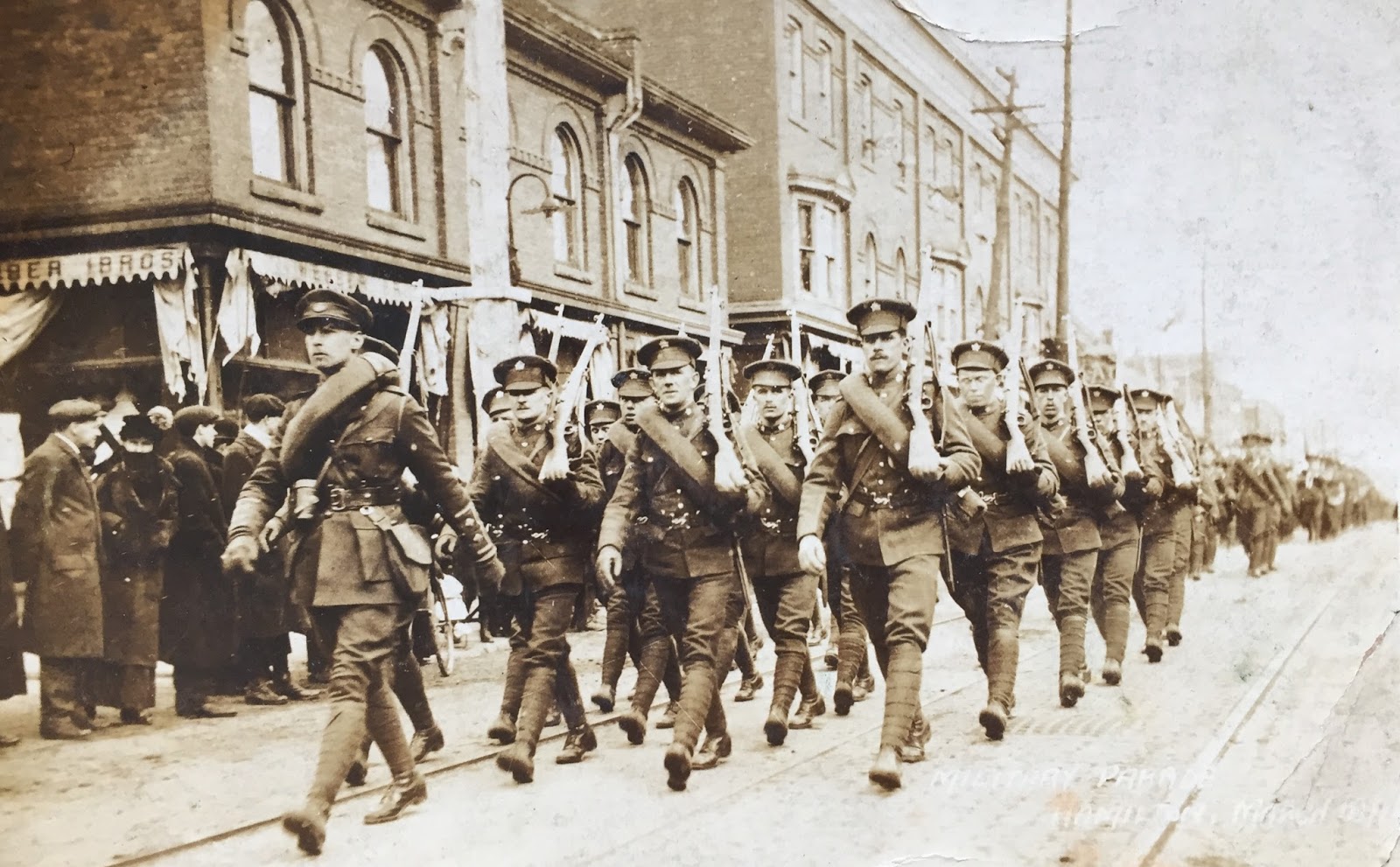 I found this fantastic postcard amongst my grandmother’s photo albums. My great grandfather, Arthur Bird Griffin is on the left behind the big guy in the front. After some research, I discovered that there was a “grand” military parade in Hamilton on March 18, 1916. According to the Hamilton Spectator, over 8,000 troops (including my great-grandfather) participated. The parade was three miles long and took one hour to pass at any given point.

It took a little digging, but several photographs were taken from the same vantage point on that day, so I was able to figure out where it was from a similar picture posted on Flickr that suggests the building is at the corner of Barton Street East and St. Matthew’s Ave. (Special thanks to Janet at the Hamilton Public Library for pointing me in the right direction). 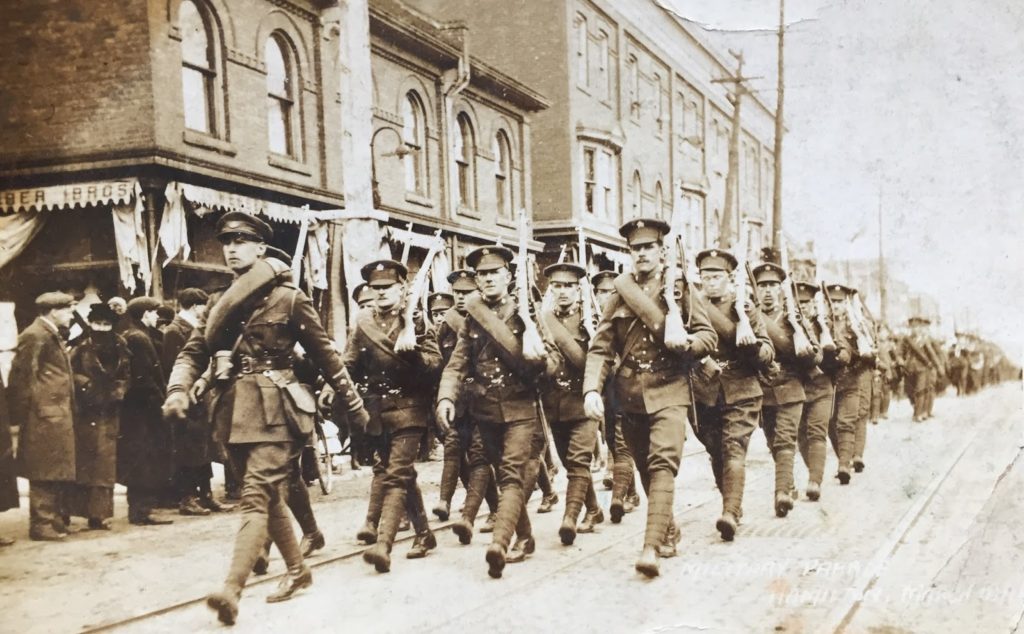 Although the local directory for 1916 doesn’t list “Webber Bros.” staff at the Hamilton Public Library confirm that Webber Brothers was a dry goods & men’s furnishings store that was located at 397 Barton Street East. The owner was Albert Edward Webber, 1872-1931. From the vantage point, I was able to determine that the photos were likely taken from up the street at 388 Barton, where the 1916 directory lists “GE Thompson Photo Supplies.”

I imagine that the photos were used as a revenue stream for Mr. Thompson – the Hamilton Public Library’s photo collection holds several others. 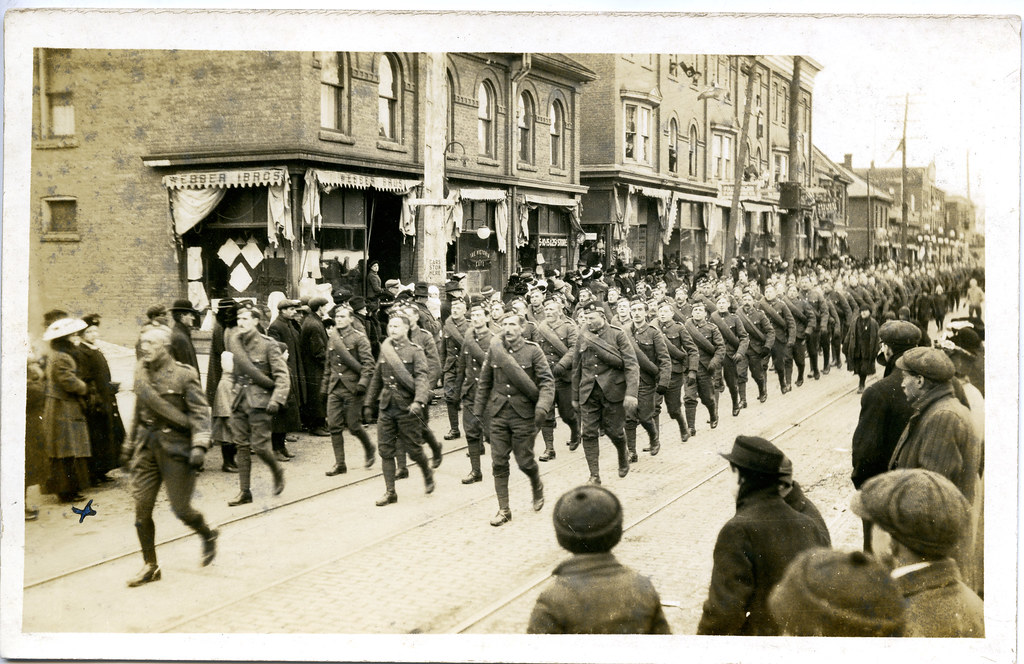 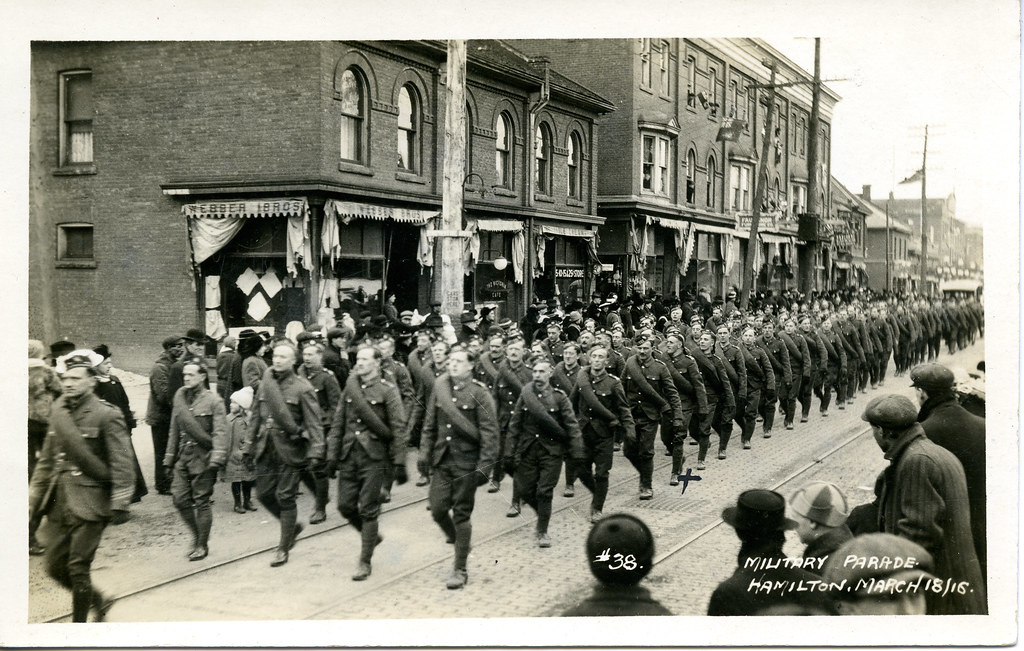 I’m also uncertain as to which regiment this is. Arthur’s obituary suggests he was a member of the 75th Battalion Canadian Expeditionary Forces, 11th Brigade, so I *think* that must be what it is (but I’d welcome correction). 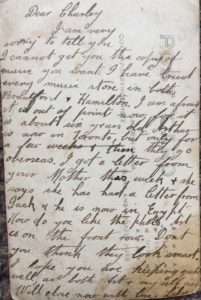 On the back of the postcard is a letter from my great-grandmother to her brother-in-law, Charles Owen (Charly) Griffin. My great-grandparents were married within a week of Arthur Bird Griffin’s enlistment in the Canadian Expeditionary Forces. A few short months after this postcard was written and before he went overseas, my grandmother was conceived. She was born in February 1917 and did not meet her father until after the war was done.

Dear Charly,
I am very sorry to tell you I cannot get you the copy of music you want. I have tried every music store in both Brantford & Hamilton. I am afraid it is out of print now, for it is about six years old. Arthur is now in Toronto, but only for a few weeks and then they go overseas. I got a letter from your Mother [last?] week & she says she has a had a letter from Jack & he is now in Egypt. How do you like the photo? Art is on the front row. Don’t you think they look smart? I hope you are keeping well, as both Art & myself are. Well [?] now with love, Lily

The “Jack” in the letter is John Harold Griffin, who may have also enlisted (hence his time in Egypt). Jack ended up in New Zealand, and his descendants are still living there. While he hadn’t enlisted at the time of this letter, Charly also enlisted in the Canadian Expeditionary Forces, and was killed in action on September 2, 1917.

I’ve written several articles on my military family. You can see them here:

Samuel Dutton, son of Edward Dutton, married Emma Podmore in Warrington, England. The couple emigrated to Canada and had one daughter. END_OF_DOCUMENT_TOKEN_TO_BE_REPLACED