I found this military photo amongst my Grandmother's things. I've tried to identify the men in the picture back to their army records.

I found the photo above in one of my grandmother’s photo albums. I hadn’t removed it—but when I did, what a find. The back had a list of all of the people in the picture and where they were from. I believe the pic dates to May 24th, 1917, only three and a half months after my grandmother was born, when her father was in France, part of an Army Intelligence Unit in the Canadian Expeditionary Forces (CEF). I’ve tried to identify the men in the picture back to their army records. Unfortunately, a few of them are identified by their nicknames only, which makes it a little more difficult for me to trace.

Listed are (from bottom left):

Sam Duguid (Vancouver, British Columbia): I found several soldiers from BC with the last name Duiguid, but none of them called Sam or Samuel or with a middle initial S. I’ll have to keep looking fo this one. I’ve looked closer into two soldiers that appear to have enlisted from or headed back to Vancouver, and they don’t appear to match either. 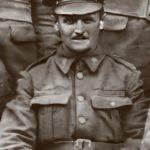 Arthur Griffin (Hamilton, Ontario): (my great-grandfather). I love how he looks in this photo (restored by The Photo Alchemist – check out her page!). I have to wonder what he was thinking.

Dinty Moore (Montreal, Québec): “Dinty” is likely a nickname, and there are a lot of soldiers with the last name Moore out of Québec. I was unable to determine which one this refers to.

Yank Matchett (North Bay, Ontario): Johnson James Matchett, born December 8, 1896. Johnson was the son of David Matchett and Matilda Taylor and he was living in North Bay at the time of his enlistment on November 5, 1915 (regimental number 177533). He was working as a clerk at a local drug store. 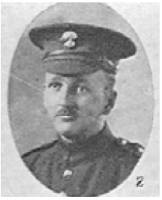 Private Johnson James Matchett was killed a few months after the group photo was taken. The records suggest he died of a gunshot wound to his right lung and a fracture of his right leg. Private Matchett is buried at the Villers Station Military Cemetery in Villers-en-Bois, France. His service is commemorated on page 291 of the First World War Book of Remembrance. There is no record of marriage – his effects were transferred to his mother upon his death.

News of Soup’s enlistment made The Daily News on August 18, 1915. The article suggests he had been in the employ of the Canadian Pacific Railway’s freight department.

Private Lenzman was awarded the French Cross de Guerre. A record related to the award suggests that on August 8, 1918, Lenzman “made a most perilous reconnaissance bringing back most important information on the enemy’s position in Beaucourt Wood.” His medical record on discharge suggests that he was in good condition, but had a small scar on the back of his right hand resulting from a gunshot wound in December 1918. This is likely the injury reported on his return in The Daily News.

A further record suggests that Soup went to Peabody, Kansas when the war was over, but records show him back in British Columbia as early as 1920.

Frank Ellingham (St. Catharines, Ontario): Private Frank Ellingham (Regimental# 164497) was born on October 31, 1896, in Whittlesea, Cambershire, England, son of George and Annie. On enlistment in October 1915, he was a bookkeeper living at 189 Geneva Street in St. Catharines. Ontario, Canada. Frank appears to have enlisted in Hamilton and may have known my great-grandfather at the start of the war.

Frank was a victim a gas attack twice—first in November 1917 and again in December, and it appears that he was still suffering from issues as a result upon discharge in May 1919.

After the war, Frank moved back in with his parents on Geneva Street and started working as a purchasing agent. On October 21, 1922, Frank married Eva Saxby, a Bookkeeper. In 1963 the couple is found on the voter’s list in Niagara Falls, and Frank is listed as “Sr.”

Frank died in 1976, and Eva died in 1981. They’re buried in Fairview Cemetery in Niagara Falls. It’s unknown whether they had more children beyond (presumably), Frank Jr..

There is a Frank Howard Ellingham living in Niagara Falls with his wife Enid on the same Voter’s Lists as Frank Sr. He was a successful doctor in general practice, went on to be the Chief Medical Examiner for Veterans Affairs in Hamilton, and later became the Director of Chronic Care and Rehabilitation at the Ontario Ministry of Health before concluding his career as a hospital administrator at a hospital in the Grand Cayman Islands. Frank Howard may have been Frank Sr.’s son.

Huff Hobbs (Toronto, Ontario): I’ve done my best, but so far I’ve been unable to determine which “Hobbs” is Huff – there are several soldiers with the same last name listed on Library and Archive Canada’s database and “Huff” is not generally a nickname for a particular name. I also did an extensive search to see if I could find photos for the people named Hobbs on the site to see if I could find a match. Unfortunately, I was unable to find one. You can find more detailed research on “Huff” here.

Archie Brien (Gaspé, Québec): Private Archie Brien (Regimental #177584) was born in Caraquet, New Brunswick on March 31, 1893. He was married to Irene Millian and working as a carpenter living in Gaspé, Québec prior to enlisting in November 1915. Like Yank above, Archie was killed in action in the Zouave Valley on the same day, August 4, 1917, just three months after the photo was taken. He’s buried at the Villers Station Military Cemetery in Villers-en-Bois, France. Archie is commemorated on page 207 of the First World War Book of Remembrance. His widow appears to still be living in Québec on a 1940 voter’s list.

Jim Warner (Winnipeg, Manitoba): this appears to be Private James Garfield Warner (Regimental #441795), born September 8, 1881, son of Wilson and Louisa Warner of Shedden, Ontario. On the 1891 Census, James is living with his family in Elgin, Ontario. I couldn’t find him in 1901, but in 1909 there’s a record of James crossing the border into British Columbia, and it appears he must have moved West for either education or work. At the time he enlisted, James’ occupation was a civil engineer, and he was not married.

James enlisted in Manitoba on December 20, 1915 (a few months after the war began but before conscription) and served in the 54th Battalion. At age 34, Jim was one of the older recruits.  He received a medal for Bravery and is listed in the London Gazette on May 11, 1917.

Private Warner was gassed at the Battle of Passchendaele on November 16, 1917, and almost a year after the group photo was taken, in May 1918, Private Warner was admitted to the Canadian General Hospital at Basingstoke (now Park Prewett Hospital). Medical records suggest that he was severely affected by the gas. X-rays of his chest show “cloudiness of the whole of both lungs, particularly the upper lobes.” Private Warner complained of, “almost constant coughing, particularly on slight exertion.”

I found no record of a marriage, but I do know that the issues that resulted from the gas never resolved. James Garfield Warner died of bronchopneumonia on March 23, 1940 at Shaugnessy Hospital in Vancouver, British Columbia and is buried in Mountain View Cemetery.

Below is a restored version of the photo from Claudia, The Photo Alchemist. If you’ve got a photo that needs to be restored, check her out. 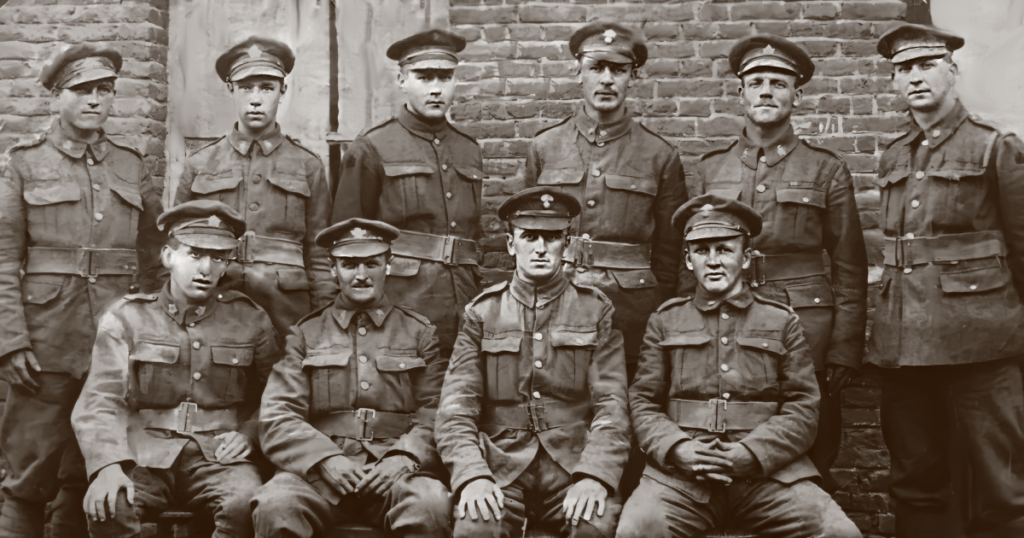 After being discharged from the Canadian Expeditionary Forces, John James Joseph “Jack” McPhail married Annie George. The couple had five children together. END_OF_DOCUMENT_TOKEN_TO_BE_REPLACED

William Alfred Webb married Louie Shepherd on December 31, 1904, in Bradford, Lancashire, England. They had five children, but only two survived to adulthood. END_OF_DOCUMENT_TOKEN_TO_BE_REPLACED

Isabella Griffin never married. She was the postmistress at the post office in Kingston Seymour, England. END_OF_DOCUMENT_TOKEN_TO_BE_REPLACED