Elijah Loxham Longworth married Mary Elizabeth Derbyshire in 1909 at St. Peter's Church in Chorley and then moved to Canada, without her. 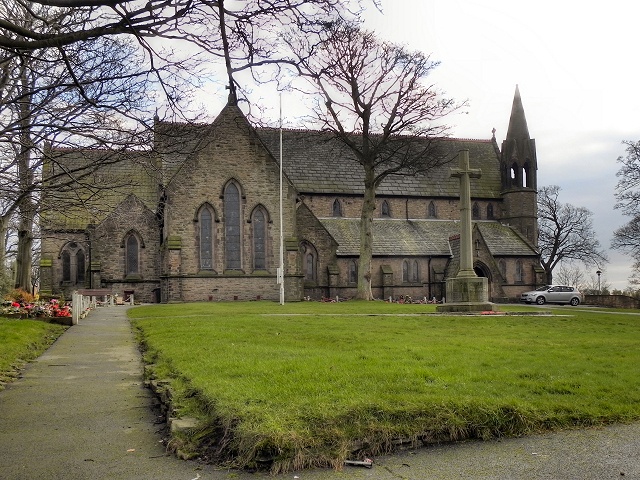 On October 23, 1910, we find Elijah listed as a passenger on the S.S. Laurentic arriving at Quebec, Canada. The Laurentic was a British ocean liner in the White Star Line.

In 1911, we find the couple separated: Elijah is found on the Canadian census living in Montreal, Québec, a border at 425 Rue Stadacona (which isn’t showing on modern maps of the city). The record suggests that Elijah has been living and working in Canada for at least a year at the time of the census. His occupation is blurred (and in French) so I haven’t been able to make it out.

Mary Elizabeth is living with her parents and siblings at 7 Botany Row in Chorley (there are currently apartments at that location). Like her father, Alfred, Mary Elizabeth is working as a cotton spinner.

Mary Elizabeth arrives in Canada on the S.S. Tunisian (a steamship from the Allan Line) on September 29, 1912. War is declared in July 1914.

Elijah and Mary and Mary’s sister Edith (who also went to Canada in April of 1912) visit home in September via the S.S. Tunisian. Elijah’s occupation is listed as “farmer”.

Upon his return, Elijah enlists in the Canadian Expeditionary Force on November 26, 1914. The address listed on his attestation paper is 1099 Rue Dorion, Montreal Québec. His occupation is “constable”. He stood 5’7″ in height and had blue eyes and auburn hair. Several of the documents suggest that he had two tattoos, hearts and hands on his right forearm and a bracelet on his left forearm. He also had a large scar on his chest (his attestation paper suggests it was his abdomen, but further medical documents confirm it was a childhood injury to his chest. 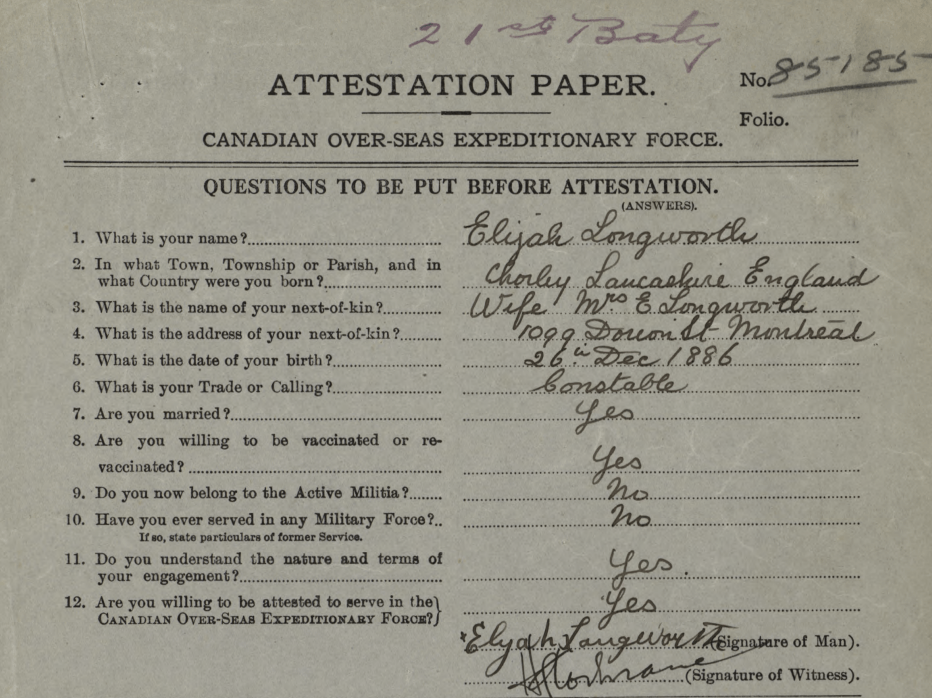 There are a number of medical records included in the file. Like my great-uncle Charles Owen Griffin, Elijah also spent some time at the Canadian Convalescent Hospital at Monks Horton as well as other medical facilities in England.

Elijah also returned to Canada and was in Montreal General Hospital for a month in 1916 which is likely when his son, Eli “Norman” Robert Longworth was conceived. Norman was born in the fall of 1916 in England. The military records show that Mary Elizabeth was living with her parents for a time at 3 Mason Street, and at some point moved to 139 Brook Street.

Elijah returned to Canada on HMT Aquitania, disembarking on January 24, 1919 and had the rank of sergeant when he was discharged on February 13, 1919. Despite multiple admissions to the hospital during his service, Elijah left the service in good health.

The records indicate that on discharge he intended to live with “Mrs. Rathwell” (sic)—who would have been his sister, Florrie Rothwell. The address given is 282 Rue Adam in Montreal.

However, it appears that after discharge Elijah almost immediately boarded the SS Tunisian (on the Canada Pacific Line) back to England arriving on February 26th. His European address is given as 2 Station Road, Liphook (which is outside of London). The reason for the trip is unknown, but possibly he intended to return with Mary Elizabeth and Norman.

A relative has advised that Elijah remarried in Montreal on December 15, 1936 to another woman named Mary—Mary Ann Pearl Condon. A marriage record was subsequently located in the Drouin records for the St. Anthony of Padua Parish Montreal (although it was incorrectly transcribed as “Elizah” Longworth). The church has since been demolished. The marriage record does not make mention of his first marriage and it is unknown whether his first wife dies or if a divorce was sought prior to the remarriage. 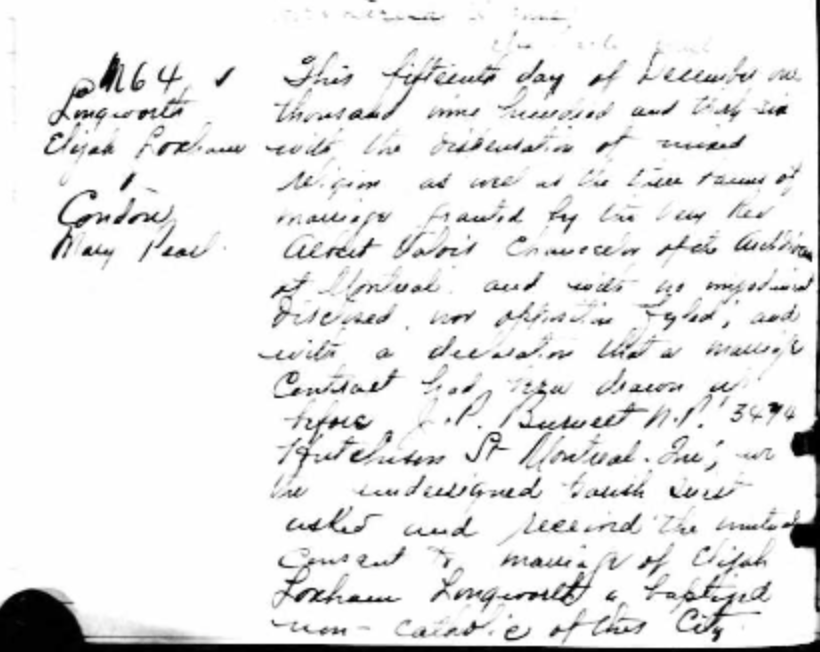 A Voter’s list dated 1940 shows Elijah an “agent” and his new wife Mary living at 11609 Rue Hebert in Mercier, Québec.

Sergeant Elijah Longworth died on December 23, 1948, in Montréal, Québec, Canada, at the age of 58. He was buried int he military section of the Mount Royal Cemetery.

Mary Elizabeth’s death has not been confirmed. There is registration on the England and Wales Death Index for a Mary Elizabeth Longworth in September 1949 in Chorley, but as Elijah remarried in 1936 and there’s no mention of divorce it’s possible she died prior to 1936.

Similarly, no death has been located for Mary Ann Pearl Condon Longworth.

Samuel Dutton, son of Edward Dutton, married Emma Podmore in Warrington, England. The couple emigrated to Canada and had one daughter. END_OF_DOCUMENT_TOKEN_TO_BE_REPLACED