Private Charles Owen Griffin's medical records show a number of injuries, including a "contusion" on his thigh and a chest contusion from a bomb. 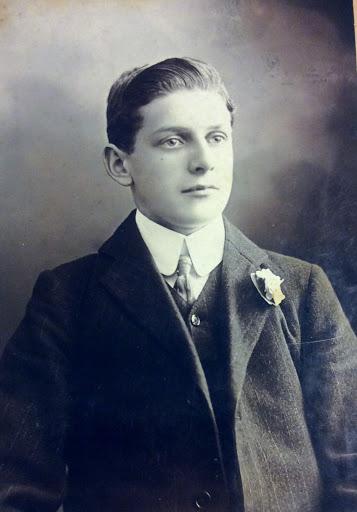 As the last born, Charles was the last child to leave the family home and was still living with his parents as late as the 1911 England census. Charles and his brother Arthur Bird Griffin boarded the S.S. Arabic in Liverpool, disembarking on April 7, 1914, in Boston, Massachusetts, USA. Arthur was already living in Hamilton, Ontario at the time, and this trip was likely either to bring Charles for a visit or because he was striking out on his own.

The next record of Charles (pictured at left with brother Arthur and sister Dorothy) is his enlistment in the Canadian Expeditionary Force. From this record, we discover that Charles has settled in Semans, Saskatchewan and is a farmer. Semans is a small agricultural village just outside of the province’s capital of Regina. Charles is still unmarried, and lists his father, still in Somerset, as his next of kin.

Charles enlisted in December 1916, almost a year and a half after his brother Arthur. Conscription by the Canadian Government did not start until 1917, so Charles’ enlistment was voluntary.  Following training, Charles was posted to the Third Brigade of the Canadian Field Artillery in June 1917 (after the unit’s Battle at Vimy Ridge in April).

Private Charles Owen Griffin’s medical records show a number of injuries, including a “contusion” on his thigh when a horse kicked him in September 1917 and a chest contusion from a bomb which had him recovering in November 1917. He spent two months in both Queen Mary’s Military Hospital in Whalley, Lancashire and the Canadian Convalescent Hospital in Monks Horton, Kent, England.

St. Mary’s treated 56,800 soldiers between 1915 and 1920 and became the Calderstones Hospital after the war. The hospital had its own railway siding used to bring injured troops directly into the hospital. The BBC recently completed a programme on the St. Mary’s.

A ledger held by the Canadian Department of National Defense suggests that Monks Horton was a mansion in Kent that had been offered by Major E.P. Wayland of Fort William, Ontario to the Imperial War Office. His offer was not accepted, so the property was offered and accepted by Canadian authorities as a convalescent hospital in April 1915. The mansion was on 225 acres of parkland about 7 miles north of Shornecliffe. It had electric light from a local plant and plenty of well water. By November 1916, the facility had 270 beds. The hospital closed in November 1918. I have not found much more information about the hospital online, however, it seems likely that Charles’ family was able to visit from Somerset while he was recuperating.

Charles was killed in action on September 2, 1918. The record suggests that “whilst with his Battery in an advanced position near Vis-en-Artois (France) he was wounded in the stomach by shrapnel. He was placed on a stretcher but his wounds were so severe that he succumbed before reaching a Dressing Station.” The city of Vis-en-Artois was badly damaged as it was taken back by Canadian forces in August and September of that year. 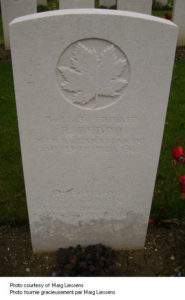 Charles was interred not far from his death in the British Cemetery at Vis-en-Artois, Plot 2, Row B, Grave 24. There’s a large Canadian memorial in Vis-en-Artois. His death is commemorated on page 420 of the Canadian First World War Book of Remembrance and he has a page on the Canadian Virtual War Memorial. Charles was awarded a Memorial Cross for his service, which was provided to his mother after his death. His will, dated January 25, 1917, leaves his estate to his mother, Sarah Jane.

Samuel Dutton, son of Edward Dutton, married Emma Podmore in Warrington, England. The couple emigrated to Canada and had one daughter. END_OF_DOCUMENT_TOKEN_TO_BE_REPLACED