John Whalen was born in 1790 in Clonmore, Carlow, Ireland, the son of Patrick. He married Bridget Doyle before 1812. 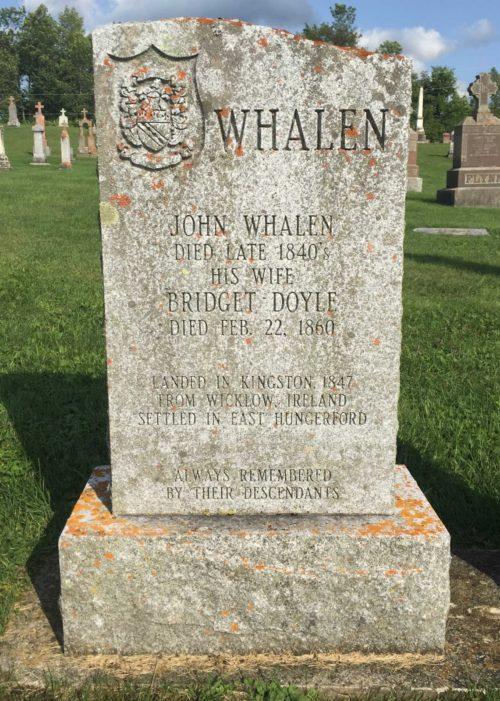 John Whalen was born in 1790 in Clonmore, Carlow, Ireland, the son of Patrick.

He married Bridget Doyle before 1812.

Bridget Doyle was born in 1790 in Clonmore, Carlow, Ireland, the daughter of Thomas and Mary Doyle.

They had eight children in 21 years.

*Three Whalen brothers (Daniel, John and James) married three sisters (Elizabeth, Teresa and Bridget). This would have made their children double first cousins as they would have had the same genetic makeup on both sides and their children would share both sets of grandparents (whereas the usual cousin relationship only sees cousins sharing one set of grandparents).

No records of the family together exist on any known census, nor have I been able to identify birth or baptismal information or emigration paperwork online.

Family lore and the tombstone for John Whalen erected in 1998 suggest that he died around 1840 at the age of 50, likely in Ireland, and that Bridget would have emigrated after that to Canada following one or more of her children.

There is a mention of a man named John Whalen from Carlow, Ireland (where it is believed our John is from) on the British Regimental Register of Service for Canada in the war of 1812, but it seems unlikely to be the same individual given the timing of the births of the first several of his children in Ireland.

Are you related to this family? Do you have photos or stories you’d be willing to share? Please contact me using the comment form below or find me on Facebook! Confused about who fits where? Check the Index!

After being discharged from the Canadian Expeditionary Forces, John James Joseph “Jack” McPhail married Annie George. The couple had five children together. END_OF_DOCUMENT_TOKEN_TO_BE_REPLACED

William Alfred Webb married Louie Shepherd on December 31, 1904, in Bradford, Lancashire, England. They had five children, but only two survived to adulthood. END_OF_DOCUMENT_TOKEN_TO_BE_REPLACED

Isabella Griffin never married. She was the postmistress at the post office in Kingston Seymour, England. END_OF_DOCUMENT_TOKEN_TO_BE_REPLACED