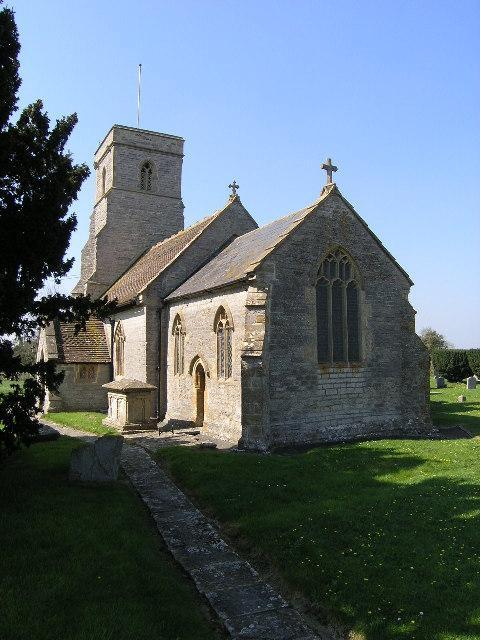 Daniel married Ann Grimes on January 17, 1856, at the Church of All Saints in Alford, Somerset, England (which was Ann’s home church). The Banns were also read prior to the marriage at Daniel’s home church, St. Thomas of Cantebury, in Lovington. (The purpose of banns is to enable anyone to object to the marriage on legal grounds. Impediments vary, but would normally include a pre-existing marriage that has been neither dissolved nor annulled, a vow of celibacy, lack of consent, or the couple’s being related within the prohibited degrees of kinship.)

They had five children in 13 years.

Daughter Sarah Jane Goodland was born on April 13, 1857, and baptized on June 7th at St. Thomas of Canterbury in Lovington, Somerset.

Fanny Goodland was born next on November 12, 1859. She was baptized on Christmas day in the parish church in Alford where her parents were married.

On the 1861 England Census, we find Daniel (31) living with Ann (27) and Fanny in Alford, Somerset. Ann’s father is living with the couple as well and both Daniel and his father-in-law John Grimes are described as agricultural labourers. The location of the home is described similar to adjacent tenants as “cottage.”

For an unknown reason, Sarah Jane is not living with her family although she is all but five years old. She is living with her maternal aunt, Jane Higgins in Bedminster.

John Goodland, named for his maternal grandfather, is the couple’s first-born son, born in late January 1862 and baptized on February 15th. John dies at the age of seven weeks and is buried in Alford.

Eliza Ann Goodland was the third daughter born to the couple in 1864. She’s baptized on December 27th at the parish church in Alford.

John Charles Goodland is born in 1870 (and also named for his maternal grandfather). He’s baptized on January 10, 1870, at St. Nicholas’ church in Brockley, Somerset.

In 1871, we find the family in Brockley, Somerset. Their address location is again described as “Cottage.” Daniel (41) is a “Farm Labourer” and it’s possible that “cottage” describes the home they live in which appears to be adjacent to a farm owned by William Petheram, who farms 132 acres and employs three men. Anne is at home with John (1), who goes by the name Charles (likely to distinguish him from his brother), and Fanny (12) and Eliza (6) are at school. Sarah Jane (15) is “Jane” on the 1871 census and is still living with her maternal aunt, Jane Higgins. Her occupation is Farmer’s assistant.

In 1881, with the exception of John Charles (11), Daniel (52) and Ann’s (43) children are not living at home. The census suggests that the family is living on a street called “Woodspring” in Axbridge (not found on modern maps). Daniel is an agricultural labourer, and John Charles is at school.

In 1891, John Charles has left, but Eliza (now going by “Annie”), is still unmarried at the age of 26, and has moved back in. Her occupation is “dressmaker.” Ann’s sister, Jane Higgins is also living with the family. Daniel and Ann’s ages (listed as 55 and 50) are incorrect, but Daniel is still an agricultural labourer. The address is listed as 24 Milton Village—I assume it’s within the village of Milton, but I haven’t found it on a modern map.

Daniel Goodland died in 1897, but I haven’t found any record other than the death registration. I don’t know if/where he is buried. He would have been about 68 years old at the time of his death.

Ann isn’t found on the 1911 census, and likely died after the 1901 census, but I haven’t found a death registration that matches.

After being discharged from the Canadian Expeditionary Forces, John James Joseph “Jack” McPhail married Annie George. The couple had five children together. END_OF_DOCUMENT_TOKEN_TO_BE_REPLACED

William Alfred Webb married Louie Shepherd on December 31, 1904, in Bradford, Lancashire, England. They had five children, but only two survived to adulthood. END_OF_DOCUMENT_TOKEN_TO_BE_REPLACED

Isabella Griffin never married. She was the postmistress at the post office in Kingston Seymour, England. END_OF_DOCUMENT_TOKEN_TO_BE_REPLACED