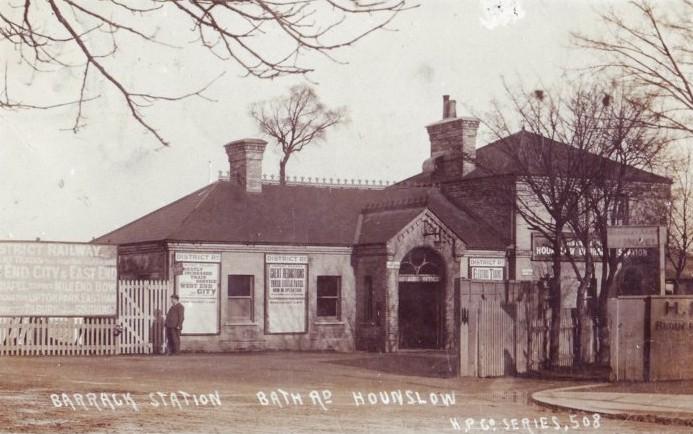 On the 1901 England census, Henry has moved out of his parents home and is a Private living in the Cavalry Barracks at Hounslow. Wikipedia suggests that in 1793, Hounslow housed permanent buildings erected as part of the British response to the threat of the French Revolution. The barracks became a very busy depot for the London military district. In 1875, the site was significantly expanded to create infantry barracks. Henry was a member of the Royal Welsh Fusiliers.

Records suggest that Henry came to Canada in 1906, when he was 23. His crossing via Liverpool through Montreal on the Dominion ship Ottawa. The crossing is recorded on the ships manifest.

Margaret Josephine Aldcroft was born on November 20, 1880, in Dublin, Ireland, the daughter of George Thomas Aldcroft and Mary Ellen (née Byrne). (*note: due to issues with Irish records, I have not been able to locate any further information about Margaret’s parents beyond their marriage in Dublin 1873.) Records suggest that Margaret emigrated to Canada in 1907.

They had five children in 11 years:

The couple’s first child, a boy, was born at home. The child died shortly after birth and was not named. There is no birth registration, but Henry’s occupation is “Grocer” on the death certificate. The doctor’s address on Hunter Street is the current location of the Hamilton Go Station which was built in 1932.

The second child born is a son, Matthew James on March 15, 1911. Henry’s occupation is now “Gardener.” The family is living at 64 Norway Avenue in Hamilton.

The couple appears on the 1911 Canadian Census with young  Matthew. Henry’s occupation is listed as “watchman.” Also listed in the home is “sister” Teresa Arnold. Neither Henry nor Margaret are known to have a sister named Teresa, and none of their sisters married an Arnold as far as I’ve found, so this remains a mystery.

The couple’s first daughter, Josephine Charlotte takes her mother’s middle name as her first, and her middle name from her paternal great grandmother. She is welcomed into the world on August 10, 1912. Henry is still a gardener and the family appears to live on Norway (future documents suggest that Josephine was born in Nanticoke, Ontario).

The couple moves their family to Buffalo, crossing the border on October 3, 1913. The crossing document suggests that the family had moved to Nanticoke, Ontario some time prior.

Their next child, Walter, is born in Buffalo on December 30, 1913 (I haven’t found a birth registration online). Unlike his siblings, Walter has no middle name.

Despite having apparently emigrated to Canada in 1906 and Walter’s birth in Buffalo, it appears the family moves back to England after Walter’s birth in April 1914 on the RMS Oceanic, in advance of World War I.

On September 1st, Henry enlists (regimental #493612). The family is living at 16 Bounces Road in Edmonton (an area of London). His enlistment registration suggests that Henry was a member of the Argyll and Sutherland Highlanders of Canada for three years. Henry is promoted to Corporal within days of his enlistment, acting Sergeant in November, and given the full rank in September 1915.

Likely given his age at enlistment and a medical issue in 1915, a good portion of Henry’s military service is served as a trainer in South Africa (shown as “home” between 1916-1919 below). He served four and a half years.

Henry received the British War Medal and the Victory Medal for his service.

After Henry is demobilized, the family moves to 114 High Street in North Finchley (part of London) and is operating a storefront for “Oil Colour & Domestic Stores.” The location is a Boots Pharmacy in present day.

Albert Edward is born on January 29, 1921, in London, England. His birth registration is not available, and I haven’t located a baptismal record.

The family returns to Canada on the Canadian Pacific ship HMS Montclare in 1923. Their immigration paperwork suggests the family was to return to Nanticoke. Ontario.

Voters registrations appear to show Margaret and Henry living at 113 Hughson Street South in Hamilton in both 1935 and 1940. Henry’s occupation is listed as “caretaker” and “janitor.”

Henry died on September 25, 1954, at the age of 71. He was cremated and his ashes were scattered east of Featherstone Point.

Margaret died on September 3, 1973, at the age of 92. She was also cremated and her ashes were scattered on the shores of Lake Erie.

Samuel Dutton, son of Edward Dutton, married Emma Podmore in Warrington, England. The couple emigrated to Canada and had one daughter. END_OF_DOCUMENT_TOKEN_TO_BE_REPLACED