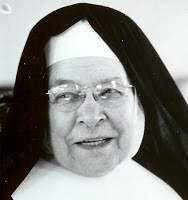 Updated May 30, 2021 to include information on Sister Bernadette’s naturalization.

Isabella Theresa McPhail was born on February 16, 1877, in Cornwall, Ontario, Canada, when her father John James McPhail (1838-1879), was 38, and her mother, Catherine Ann (nee McIntosh) (1845-?), was 32. (Side note, her baptismal record is assumed to be the correct year. Her social security application and convent records suggest she was born the following year.)

Isabella had four brothers and two sisters. A specific record for Isabella hasn’t been located on the 1891 Canadian census (there are several single women around the same age named Isabella or Bella McPhail in Cornwall Ontario which might be her). It’s likely that she followed her sister Mary Catherine (1867-1939) and her mother, Catherine, to Montreal, Quebec at some point after 1887 when Mary Catherine married her husband John Hardigan. She is named the godmother of her sister’s son Thomas Alexander in 1894.

Isabella left Montreal for the Bethany Convent in St. Paul Minnesota becoming a postulant on June 17, 1898. She was received by the convent as a noviate on March 19, 1899 and became a teacher. Isabella became Sister Mary Bernadette and took her first vows exactly two years from her reception on March 19, 1901.

We find her on the 1910 Federal Census, a teacher at Ascension School. On this record, she is listed as “Bernadette” McPhail.

The Sisters of St. Joseph of Carondelet were established in 1836 when six Sisters of St. Joseph left Lyon, France for Carondelet, near St. Louis, Missouri. In 1851, four Sisters left St. Louis, following the Mississippi River to St. Paul, Minnesota. As the community grew, the order established a network of schools (elementary, secondary and colleges), hospitals, and social services in Minnesota and in other parts of the USA.

The Sisters of St. Joseph of Candolet have extensive archives and records of the early days of the convent. Michelle Hueg, the archivist, for St. Paul suggests that the order many Sisters who came from Canada, mostly from Quebec and Prince Edward Island. The archive’s records show that Sister Bernadette was a teacher at several of the schools in St. Paul (SP) and Minneapolis (Mpls) as well as a few years in North Dakota (ND) for several years. After that she started working domestic duties in several of the Orders, hospitals and orphanages. Further records suggest she was a trained nurse.

A Territorial and State Census in 1905 finds Sister Bernadette in Anoka (still listed as Isabella McPhail):

Several references to Sister Bernadette exist in the digital archives for the order. At some time after Sister Bernadette’s death, an oral history of the Order was started by Ann Thomasine Sampson, who was a later member of the Bethany Convent, to preserve the memories of the older sisters. There are transcripts of the conversations in the digital archives for the Sisters of St. Joseph.

Sister Marie Celeste DeLage was interviewed at Holy Angels Academy on December 6, 1977. She suggests that she moved to Minneapolis when she was 9, and her family belonged to the Our Lady of Lourdes parish and she went to the school there in about 1905.

Sister Ann Tomasine (SAT): Who were some of the teachers that you had at Our Lady of Lourdes?
SMC: My first one was Sister Bernadette. She is from Canada.
SAT: McPhail?
SMC: Yes, Sister Bernadette McPhail.

The history of St. Paul Province confirms that Sister Bernadette was among the first at Notre Dame De Lourdes.

Sister Canice McCabe did teaching assignments in Kilkenny, Minnesota between 1931 and 1971. She was interviewed for the oral history in June 1976. Sister McCabe’s father’s family emigrated to Kilkenny and her mother was born there. Prior to entering the order, Sister McCabe attended the Kilkenny School where (as you can see above), Sister Bernadette was in 1911. Sister McCabe was asked what she knew about the founding of the Kilkenny colony. The transcript says:

(SAT): I was looking at the date here, to see when the first Sisters came. According to this book, they came in 1910, and the first Sisters were Sister Mary Thomas Simeray, as the Superior.
SCM: That is right.
SAT: Sister Flora Culp, Sister Hubert Ryan, and Sister Bernadette McPhail.
SCM: That is right. Sister Henricka too. There were 5 or 4, I know. Sister Leonard too.
SAT: When you went into school then, how many teachers were there then? When did you actually start with the Sisters? In 1910?
SCM: 1911, I think. I went 2 years, and at the time there were so many older girls, and boys too, that went in there to the Sisters. We got just the grade subjects, and we took Teacher’s examinations, at that time, and the Sisters did a good job. I mean, the background for the country schools, wasn’t too easy for them. We got Second Grade Certificates. That is what kind of gave them a boost. That the sisters were O.K. as teachers.

Later in the transcript, Sister McCabe is asked about her memories of Sister Bernadette. She has no specific memories.

In 1918, Sister Bernadette appears in Minnesota’s Alien Registration (with the name Isabella McPhail). She is forty years old.

The 1920 Federal Census finds Sister Bernadette living and working at St. Joseph’s Hospital in Ramsey Minnesota. She is listed as Isabella.

Sister Bernadette became a naturalized citizen of the United States on June 8, 1929. Her naturalization papers note her height at 5 ft 5 1/2 inches, with grey hair and hazel eyes. This document also suggests she was born the year following her baptism. At the time of her naturalization, Sister Bernadette was living at St. Michael’s Hospital in Grand Forks, North Dakota. It suggests she came to the US through Michigan on June 16, 1898, and as above, became a postulant on the 17th. She was a continuous resident of the United States from August 6, 1914, and had been in North Dakota since October 18, 1926. Witnesses to her application included Susanna R. Biren (Sister Oswina) and Lucy Sauser (Sister Lidwina), who resided with Sister Bernadette at St. Michaels.

The 1930 Federal Census finds Sister Bernadette still living at St. Michael’s Hospital in Grand Forks, North Dakota working as a Trained Nurse. On this census, she is “Bernadette” McPhail.

The archival records suggest that Sister Bernadette was back at St. Joseph’s hospital at the time of the 1940 Federal census, but she has not been identified on that document under either the name Bernadette or Isabella. It’s possible the record has been damaged or transcribed incorrectly.

In the history, Sister Lucienne Arrell suggests, “When I first went to Bethany I said, “I think that I could feed somebody,” so I began to feed Sister Bernadette. She was bed-ridden, but they would sit her up in bed and I would feed her when they brought in the tray.”  Sister Lucienne is likely referring to the Bethany Convent at some time after Sister Bernadette’s retirement, where she stayed until the time of her death. It’s possible she was very close to death at the time given the description.

It is very clear from the records that Sister Bernadette was an ambitious and well-loved member of the order.

Sister Bernadette is memorialized on page 346 in the book “Seeds on Good Ground: Biographies of 16 Pioneer Sisters of St. Joseph of Candolet,” described as one of the “Sisters of St. Joseph who contributed services in the fields of education, health care, social service, arts, and spirituality in the state of Minnesota from 1851 to the present time.” She was a nun for 75 years until her death of pneumonia on May 18, 1973, at the ripe age of 96. A funeral was held on May 21st before she was buried in the Resurrection Cemetery in St Paul, Minnesota.

This clips shows what Sister Mary Bernadette would have looked like in life. It was created using the MyHeritage Deep Nostalgia app.

All images of Sister Mary Bernadette were provided by the Sisters of St. Joseph, St. Paul Province Archives.

Samuel Dutton, son of Edward Dutton, married Emma Podmore in Warrington, England. The couple emigrated to Canada and had one daughter. END_OF_DOCUMENT_TOKEN_TO_BE_REPLACED