William Alfred Webb married Alma Leona Beckler on September 30, 1930. At the time of the marriage, William was a Funeral Director. 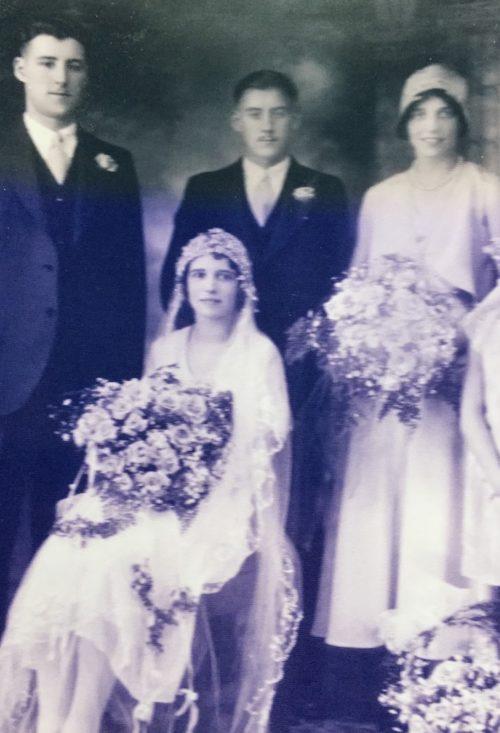 When William Alfred Webb Jr. was born on May 2, 1909, in England, his father, William Alfred Webb (1883-1950), and his mother, Louie (née Shepherd) (1882-1962), were both 26. William Sr. and Louie emigrated to Canada when William was ten months later coming through Nova Scotia and settling in Hamilton. William’s brother George Edward (1915-1957) and three other siblings who died shortly after birth were born after the family arrived in Hamilton.

William married Alma Leona Beckler on September 30, 1930. At the time of the marriage, William’s occupation is listed as “Funeral Director,” and Alma is listed as “Office work.” Brother George was a witness to the marriage, and the other witness is listed as Ella Harrison, Alma’s sister (featured in the wedding photo).

In 1953, we find the family at 86 Wexford Avenue North, just a few blocks from William’s brother George. William’s occupation is foreman.

William Alfred Jr. died on February 3, 1960. Alma was a widow for over twenty years, dying at the Brantwood Manor Nursing Home in Burlington, Ontario on December 19, 1982, at the age of 70.  Her obituary from the Hamilton Spectator reads:

The couple are buried in Woodland Cemetery in Hamilton.

After being discharged from the Canadian Expeditionary Forces, John James Joseph “Jack” McPhail married Annie George. The couple had five children together. END_OF_DOCUMENT_TOKEN_TO_BE_REPLACED

William Alfred Webb married Louie Shepherd on December 31, 1904, in Bradford, Lancashire, England. They had five children, but only two survived to adulthood. END_OF_DOCUMENT_TOKEN_TO_BE_REPLACED

Isabella Griffin never married. She was the postmistress at the post office in Kingston Seymour, England. END_OF_DOCUMENT_TOKEN_TO_BE_REPLACED