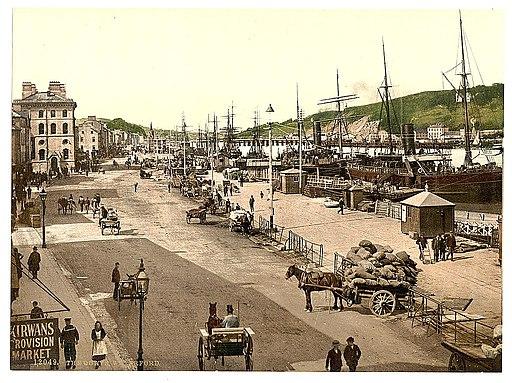 (*note: the name Eagan is spelled both Eagan and Egan in multiple records. For completeness and given future generations seem to have settled on the spelling “Eagan,” this is the name I’ll be using.)

According to historian John Mannion (1973), approximately 90% of all Irish immigrants to Canada came from within a 40-mile radius of Waterford city, a major port for vessels crossing the Atlantic. Census records suggest that Michael emigrated to the US in 1872, at the age of 23. He settled in Rhode Island. Four years after his arrival, Michael married Catherine Trainor on July 17, 1876, in Newport, Rhode Island.

They had seven children over ten years:

Patrick Joseph (who was known as Joseph) was born on May 7, 1877. You’ll note that the registration does not include the extra “a” – he’s Patrick Egan.

John Charles was born on October 2, 1878. John Charles and brother Michael are recorded as Eagan.

Michael Stephen was born on May 17, 1880. At the time of the birth registration, his father’s occupation is “laborer.” The family lives on Shove Street in Providence.

The 1880 Federal Census is taken just a couple of weeks after Michael’s birth. The record shows the couple and all of their children living at 16 Shove Street. Michael’s occupation is listed as “laborer.”

Alice J. Eagan was born on July 7, 1886. I haven’t identified any records that tell me what the “J” is for, but if I had to guess, it’s likely Josephine (as Joseph is a family name).

All of the girls are recorded with the name “Egan” in the birth index. Alice appears to be listed twice, as both Egan and Eagan, and Thomas is only listed as “Eagan.”

The same goes for the death records. Both children named “Mary” are recorded as Egan and Thomas is Eagan.

There appear to be no further children born to the couple after Mary Agnes. Most of the 1890 federal census was destroyed in a fire at the Commerce Department in Washington DC in January 1921. The Rhode Island records were among those destroyed.

John Charles died of tubercular meningitis on November 30, 1895. The death notice in the Providence Journal reads:

EAGAN – In this city, on the 30th ult., John C., the son of Michael and Catherine Eagan, aged 17 years and 6 months. Funeral from his parent’s residence, No. 47 Laurimer avenue on Monday, Dec 2d at 8:30 a.m. Relatives and friends invited to attend. Newport papers please copy.

Michael Steven died of tuberculous peritonitis on February 2, 1897. The death notice in the Providence Journal reads:

It’s sad that of the couple’s seven children, only two (Joseph and Alice) survived into adulthood.

At the time of the 1900 US Federal Census, the family is still living on Lorimer Avenue. Michael’s occupation is “Fireman” at a screw mill. The document suggests that he became a citizen in 1875. Joseph is working at the same mill as an operator. Alice, only 13, is at school.

Catherine died on August 28, 1907, in Providence, Rhode Island, at the age of 57. The family is still living on Lorimer Avenue. The cause of death is noted as diabetes. Her death notice reads:

In 1910, Alice and Michael have moved in with Joseph and his new wife Mary Ellen (nee Duffield) at a residence on Stockton Street. This document suggests that Michael emigrated in 1872. Joseph is still working at the screw factory but it appears that Michael has retired.

I lost track of Michael after 1910. There are a couple of men named Michael Egan or Eagan in the subsequent state censuses in 1915 and 1925, but further research is required to identify which one is the right one as none of them are living with a family member or at a previously known address.

In around 1922, Michael moved in with his son Joseph’s family (and he may have been the original owner of the home at 9 Cluny Avenue.) Michael died on October 19, 1930, in Hamilton, Ontario, Canada, at the age of 81. He is buried in Holy Sepulchre Cemetery. His obituary in the Hamilton Spectator reads:

Michael Eagan, a former resident of Providence, RI, passed away in his home, 9 Cluny Avenue, yesterday at the age of 81 years. For the past eight years he has made this home is city. Left to mourn his death are one son, Joseph, of this city, with whom he resided, and a daughter, Mrs. Alice Hebert, of Buffalo. The funeral will take place on Wednesday morning from the above address to St. Ann’s church, thence to Holy Sepulchre Cemetery.

After being discharged from the Canadian Expeditionary Forces, John James Joseph “Jack” McPhail married Annie George. The couple had five children together. END_OF_DOCUMENT_TOKEN_TO_BE_REPLACED

William Alfred Webb married Louie Shepherd on December 31, 1904, in Bradford, Lancashire, England. They had five children, but only two survived to adulthood. END_OF_DOCUMENT_TOKEN_TO_BE_REPLACED

Isabella Griffin never married. She was the postmistress at the post office in Kingston Seymour, England. END_OF_DOCUMENT_TOKEN_TO_BE_REPLACED