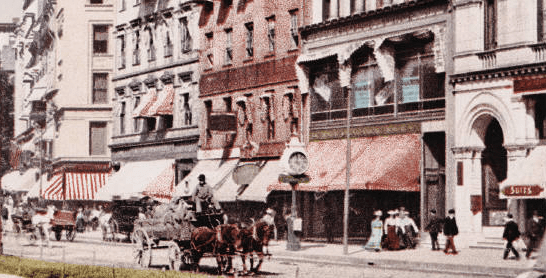 Alice J. Eagan married Francois John Baptiste Hebert on November 2, 1913, in Middlesex, Massachusetts. At the time of the marriage, both the bride and groom are listed as living at 315 Tremont Street in Boston. Their parents are in Rhode Island, so the reason they’re living in Massachusetts is unknown.

(Trimountaine was the name given by the 1630 settlers to the peninsula that would later become City of Boston. Tremont Street still carries an alternative form of the original name.)

They had three daughters:

Dorothy and Miriam Hebert (twins) were born on February 22, 1914. At the time the family was living at 231 Northhampton Street in Boston, Massachusetts. John’s occupation is “Laborer.”

On the 1920 US Federal Census, the family is living at 15 Elm Street in Suffolk, Boston, Massachusetts. John’s occupation is an electrician in a shipyard (which may give us an explanation of how they came to be in Boston, as it is a major port).

By the 1930 US Federal Census, the family has moved to Buffalo, New York. The family is living at 1773 Broadway Street. John is working as a welder in a car shop. All three girls are still living at home.

On the 1940 census, the widowed Alice is living on her own on Spring Street in Buffalo, New York.

It is unknown what happened to Dorothy after the 1930 census, but there is a record in the 1940 census of a Dorothy Hebert in the Buffalo State Hospital (originally the Buffalo State Asylum for the Insane) that matches Dorthy’s general information. I have no further information on her twin sister Marian after 1930. (I also never discovered what their middle names were – they list initials on the 1930 census, but it’s not on their birth records).

Evelyn Marie Hebert married Harry W. Barrett. They had two sons. Both of them died in the early nineties in Sarasota, Florida, and they’re buried at St. Patrick’s Cemetery in Oswego, New York.

After being discharged from the Canadian Expeditionary Forces, John James Joseph “Jack” McPhail married Annie George. The couple had five children together. END_OF_DOCUMENT_TOKEN_TO_BE_REPLACED

William Alfred Webb married Louie Shepherd on December 31, 1904, in Bradford, Lancashire, England. They had five children, but only two survived to adulthood. END_OF_DOCUMENT_TOKEN_TO_BE_REPLACED

Isabella Griffin never married. She was the postmistress at the post office in Kingston Seymour, England. END_OF_DOCUMENT_TOKEN_TO_BE_REPLACED