Ernie Prosser and The Golden Gloves

My great-uncle Ernie Prosser was a boxer in his youth and he won the Buffalo Golden Gloves in 1944. 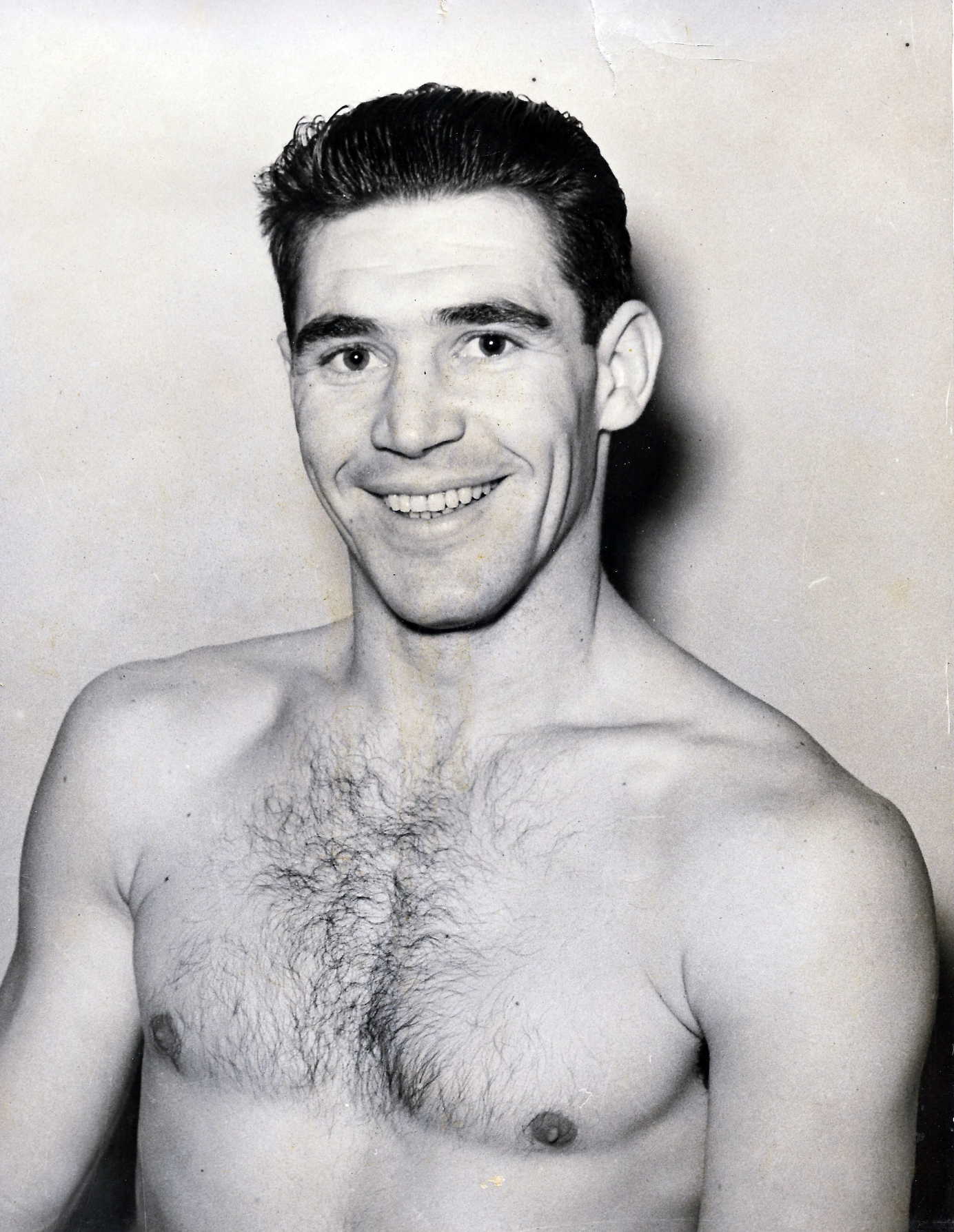 My Uncle Ernie was always just Uncle Ernie. A name was all the man shared with the popular children’s character.  I remember him being very tall, and yet very soft and gentle. My mother says that when my father had to work the day I was brought home from the hospital, Uncle Ernie was the one elected to come and pick us up. He and his wife Gladys never had any children. I was never sure if it was by choice so much as by design, but Gladys doted on her sister’s children and grandchildren.

Every year at Christmas time, I toast Gladys, who would come to our home when I was a child and spend the day in my parent’s bedroom wrapping presents so my mother didn’t have to do it. In fact, it was she taught me how to wrap a present properly. Every year, I wish I had an Auntie who would come and take over my own wrapping duties.

And although I have few memories of Uncle Ernie (he died when I was eight), I do remember he used to play a game with his nieces and nephews. He’d hold up a dollar bill between our index finger and thumb. He’d tell us if we could grab it before it hit the floor, it was ours. Of course, we were never able to do it. 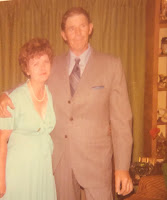 Gladys and Ernie enjoyed sports. They were regular bowlers and members of the local golf club. I knew that Ernie had also been a boxer in his youth, before he met my aunt. She had a photo somewhere (I’ve seen it but I have no idea where it is now) of him in his boxing gear, young and imposing. He was quite tall and skinny. I imagine he was quite quick too.

Ernie’s obituary suggested that he won the Golden Gloves Championship in Buffalo, and I thought I might have a look into that. I was very surprised by what I discovered.

The November 22, 1944, Buffalo Courier-Express suggests, “It’s a case of hurry, hurry, hurry for the amateur boxers who want to get in the Golden Gloves chin-dig in Memorial Auditorium December 6th and 7th.” The article goes on: “A total of 67 entries had been received up to last night. Included among them were four Hamilton, Ont., champions, a team touted as strong enough to bat ‘four-for-four’ in its Gloves title bid.” Included in that group of four was Uncle Ernie, in the light heavyweight class, along with Nicholas Poppo (featherweight), Robert Gleason (lightweight), and Martin Hendricks (welterweight).

According to the December 3, 1944 Buffalo-Courier Express, “Niagara District and the Province of Ontario boxers wrote another brawling chapter in Buffalo Golden Gloves history…battling through the championship finals of their two-night, thrill-packed tourney before a rousing crowd that neared the 10,000 mark. When the last punch had been pitched, and the last echo of a cheer stilled, five Buffalo lads had been crowned Open division champions with three Canadian invaders holding other titles.”

The article goes on, “From flag fall to finish it was a night of thrills. And as if saving an exceptionally tasty dish for the dessert, the program closed with roly-poly, always-laughing Chuck Cammarato, the poor man’s Tony Galento, fashioning a crowd-pleasing upset with a triumph over heavily-favored Ernest Prosser in a bout that saw Chuck simply out-game his opponent.”

The end of the round saw Nick Poppo win his match, and Robert Gleeson and Uncle Ernie taking the runner-up spot.

December 6th marked the opening of the championship finals. Victors from the open division would qualify for the Eastern Golden Gloves title competition in Madison Square Garden in mid-March. The December 7th Buffalo Evening News lists Uncle Ernie among the finalists to fight the following evening, he outpointed Jim Mann. Fellow Canadian (and son of a Canadian Army war hero wounded in Dieppe) Nick Poppo TKO’d Phoenix Godby, and Robert (Bobby) Gleason outpointed Jackie Westerfield. Ernie was pitted yet again against Chuck Cammarato for the final.

A December 8th write up in the Buffalo Evening News suggests that “Chuck Cammarata [sic] outpointed Ernest Prosser, Hamilton.” A December 28th article in the Buffalo Evening News clarifies: “Cammarato took a disputed decision and the 175-pound title after flooring his foe in the second round, then nearly being flattened himself in the third. It was the only decision, in some 50 bouts, booed extensively by the patrons.”

As a result of the dispute, the bout was to be refought on January 3rd along with several other invitation matches from the finalists. But the January 3rd Buffalo Evening News suggests that the bout was postponed to January 15th because of transportation issues due to a winter storm. The Canadian entrants were “snowbound.”

But on January 16th, the results show “175-pound open – Ernie Prosser, Hamilton, won by default over Chuck Cammarata, who failed to appear.” An article in the Buffalo Evening News suggests that Uncle Ernie’s opponent didn’t show up at the event, even though he’d left his home in his boxing togs at 5 PM and his father was already in the crowd. “His disappearance mystified fight officials,” and the officials were quoted as saying that if Chuck didn’t have an “unusually good excuse,” he would be suspended indefinitely. The article suggests that the mystery was solved after an interview with his parents the following morning. Apparently, Cammarata returned home at 9:30 PM with his nose bleeding and he was unable to appear for the fight. The crowd was not disappointed though, seeing 15 bouts which included a KO from Robert Gleeson [sic].

So, Uncle Ernie’s “win” of the Buffalo Golden Gloves was not a clear win. After a disputed round initially, he won by default after his opponent failed to show. But as a result of his win, Uncle Ernie was headed to the Eastern Golden Gloves title competition March in New York City.

Although clearly mislabelled, Uncle Ernie (top row far right) left for Madison Square Gardens with Nick Poppo and his fellow victors on March 11, 1945. It’s unclear why, but finalist Bobby Gleason does not appear to be among the group.

The first rounds were March 13th. The Courier-Express on March 14th suggests that “Prosser looked like a sure-fire winner for two minutes of the first round” against New York’s Roland La Starza, “but then lightning, in the form of a right cross to Ernie’s temple struck from out of nowhere.” Poor Uncle Ernie was pitched face down, and “greeted by a sizzling left to his temple when he arose, went down for a flash and then ran into the finishing punch, a right uppercut.” The match ended with Ernie “out cold, hand hanging out of the ring, and the referee didn’t even bother counting.”

The other Canadian in the match, Nick Poppo won the night, with a two-round TKO win over Marvin Marshall from Washington. On the second night however, the Buffalo Evening News on March 15th confirms that Poppo “was eliminated by the decision route in three rounds by Rafael Reveron, stocky southpaw who used his left with dexterity to outslug the jabbing Canadian who bled from the nose in the second and third rounds.”

And as a result, although three Hamiltonians made it through, none of the original Hamilton four were among the winners of the Eastern Golden Gloves competition.

After being discharged from the Canadian Expeditionary Forces, John James Joseph “Jack” McPhail married Annie George. The couple had five children together. END_OF_DOCUMENT_TOKEN_TO_BE_REPLACED

William Alfred Webb married Louie Shepherd on December 31, 1904, in Bradford, Lancashire, England. They had five children, but only two survived to adulthood. END_OF_DOCUMENT_TOKEN_TO_BE_REPLACED

Isabella Griffin never married. She was the postmistress at the post office in Kingston Seymour, England. END_OF_DOCUMENT_TOKEN_TO_BE_REPLACED