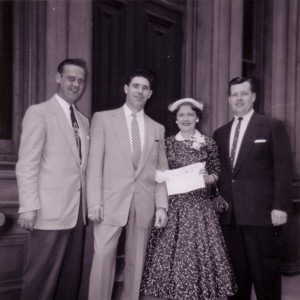 When Gladys May Griffin was born on October 17, 1922, in Canada, her father, Arthur Bird Griffin, was 33, and her mother, Lily (née Moore), was 31. She was the middle daughter with two sisters.

Gladys married Ernest Charles Prosser. The marriage record isn’t available yet but they married in Hamilton in the early 1950s (Ernest and Gladys are still living with their respective parents in Hamilton as late as 1949 according to Canadian voter lists).

When Ernest Charles Prosser (Ernie) was born on March 19, 1919, in Ontario, Canada, his father, Richard William Prosser, was 29 and his mother, Catherine Elizabeth (née Parr), was 26. He had one brother and one sister.

In 1957 we find the couple listed at the two-bedroom home they would live the rest of their lives in at 278 Roxborough Avenue, Hamilton. The home was a block away from Gladys‘ sister, Dorothy.

Ernie worked as a machinist at P.B. Yates Machine Co. in Hamilton, a company that claimed to be the largest manufacturer of woodworking machinery in the world. After being employed there for thirty years, Ernie went on to work at Stelco for another 17 years, until his retirement in 1984.

Gladys was a housewife. The couple did not have any children, but Gladys spent a lot of time doting on her niece and nephew and their children. Her home was always warm and cozy, and always had a cat or two.

In the early 1940s, Ernie was a well-known light-heavyweight club fighter in Hamilton. He boxed out of the East End Boxing club at St. Ann’s and in 1944 he won the Golden Gloves Championship in Buffalo. He was a great sportsman—and the couple bowled and golfed together regularly and were members of the Chedoke Golf Course (and Gladys continued these activities after Ernie’s death).

Ernie died after a lengthy battle against lung cancer not more than a year after his retirement on October 3, 1985, at St. Joseph’s Hospital in Hamilton, Ontario, Canada, at the age of 66.

Main Image: Ernest and Gladys on their wedding day.

After being discharged from the Canadian Expeditionary Forces, John James Joseph “Jack” McPhail married Annie George. The couple had five children together. END_OF_DOCUMENT_TOKEN_TO_BE_REPLACED

William Alfred Webb married Louie Shepherd on December 31, 1904, in Bradford, Lancashire, England. They had five children, but only two survived to adulthood. END_OF_DOCUMENT_TOKEN_TO_BE_REPLACED

Isabella Griffin never married. She was the postmistress at the post office in Kingston Seymour, England. END_OF_DOCUMENT_TOKEN_TO_BE_REPLACED