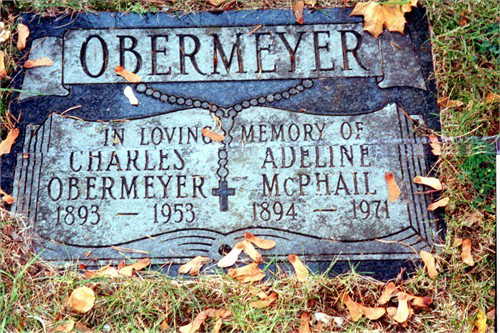 It appears that Charles may have been a member of the military in the Canadian Siberian Expeditionary Force (CSEF). The CSEF was sent to Vladivostok, Russia during the Russian Revolution to bolster the allied presence, oppose the Bolshevik revolution and attempt to keep Russia in the fighting against Germany. The force of over 4,000 soldiers was authorized in 1918. Charles appears to have returned to Toronto from Russia on May 6, 1919.

Charles and Oonie had at least 13 children during their marriage (several are still living) including:

The young family is found on the 1921 Canadian Census. The census suggests (as does his name) that Charles has a Germanic origin. His occupation is listed as a “Printer”. The family is living at 28 Fullerton Avenue in Hamilton.

Shortly after the census, young Henry, who was born on May 21st of that year, died on July 1st. The cause of death is listed as Spina Bifida and Hydrocephalus. He’s interred at Holy Sepulchre Cemetery. He was one month and 14 days old.

Rita Adeline is likely born next, but records of her birth are not yet available. Her death records indicate she was born in 1922 and died in 2009.

John James, was born on April 25, 1924, and died after three days. His medical certificate suggests he was born seven months premature and had a congenital defect. He is also interred at Holy Sepulchre.

The birth of a third baby boy, stillborn, is recorded on January 23, 1925. This child was born at the Casa Maria Hospital, a maternity hospital at 58 Charlton Street in Hamilton (later incorporated into St. Joseph’s). The family is still living on Fullerton Avenue at this point. The child is also interred at Holy Sepulchre.

Samuel Dutton, son of Edward Dutton, married Emma Podmore in Warrington, England. The couple emigrated to Canada and had one daughter. END_OF_DOCUMENT_TOKEN_TO_BE_REPLACED