In the course of my investigations into the Duffields, I found an article that appeared to provide information about my ancestors, but took some sleuthing to confirm. 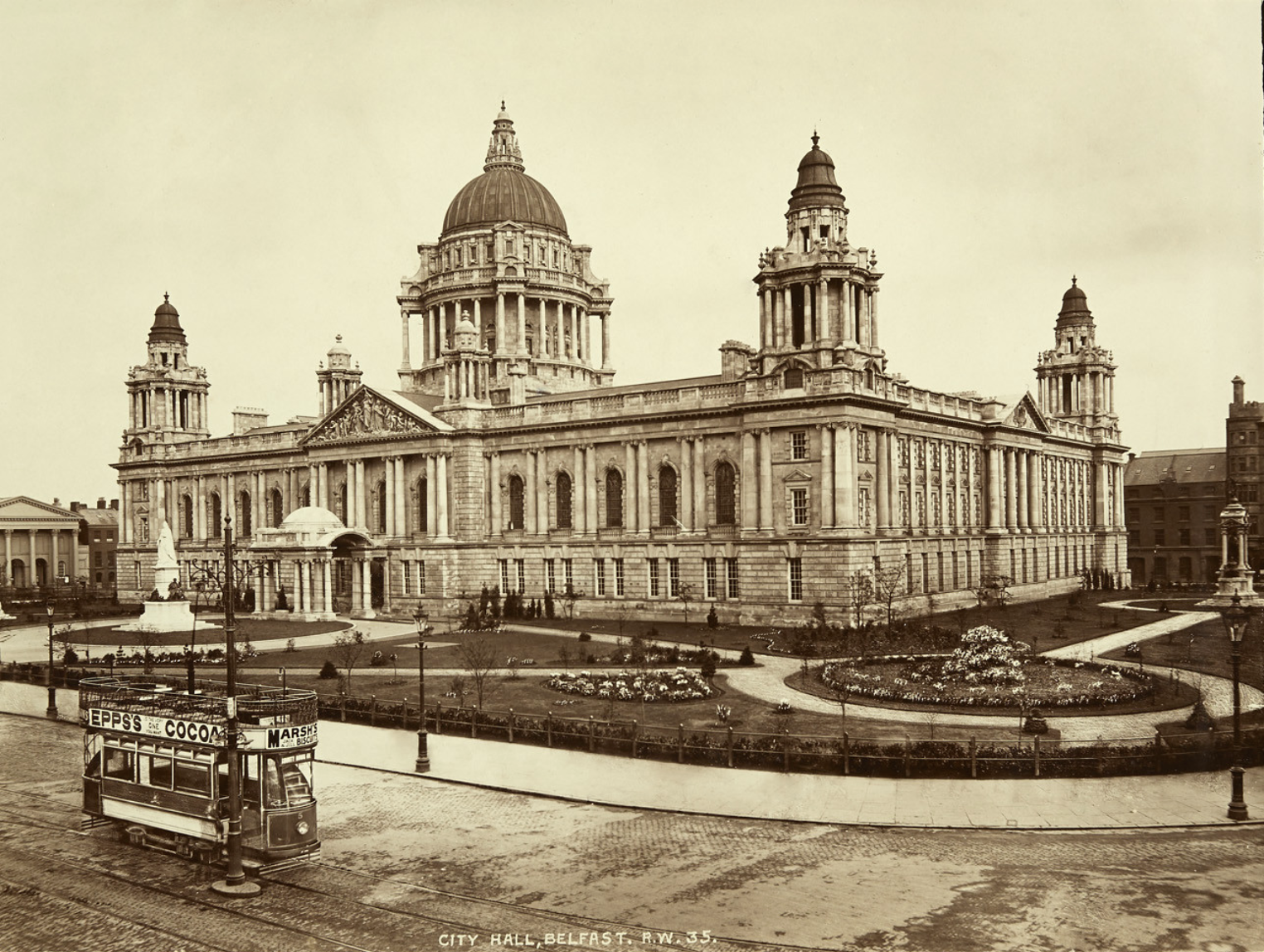 In the course of my investigations into the Duffield family, I came across an article that appeared to provide information about my ancestors, but took some sleuthing to confirm. I used the search terms “Duffield” and “Lisburn” in the Belfast papers for the appropriate time period as Lisburn was the main street from which Ulsterville (where we have confirmed the Duffields resided) extended.

An article in The Northern Whig on July 20, 1878 describes a court case that took place after an assault that took place on “The Twelfth” in Ireland. (According to Wikipedia, “The Twelfth” is an Ulster Protestant celebration held on 12 July. It celebrates the Glorious Revolution (1688) and victory of Protestant King William of Orange over Catholic King James II at the Battle of the Boyne (1690), which began the Protestant Ascendancy in Ireland.) The article suggests some ill will between two families, the Fergusons and the Duffields.

With the article from the Whig, I changed my search terms and found two more articles describing the incident, one in the Belfast Telegraph on July 19th, and one in Freeman’s Journal on July 20th.

The articles detail a very complicated case, in which upwards of twenty witnesses were examined to determine what had happened. It appears that the complaint was filed by Thomas Ferguson,  who suggested that James and Samuel Duffield, William Megaw, James and Thomas Hill, as well as two others—Samuel Spence and Hector Lennox, were involved in the assault. According to the Whig, the complaint suggested that the defendants entered the Ferguson residence and assaulted Thomas Ferguson and his two sons. The Duffields and Hills filed cross complaints for assault against the Fergusons.

According to the Whig, Thomas Ferguson junior stated on the stand that the “unprovoked” incident started when “Duffield, sen.” (presumably James) arrived at the Ferguson house at 11 PM and pushed himself in, suggesting he would “beat ” the elder Ferguson. Ferguson junior described the elder Duffield as “quite a buffer.”

However, the Whig suggests that Robert James Hill refuted Ferguson junior’s evidence, suggesting that the argument had started at the Duffield house earlier—when Robert Ferguson struck him in the head with a brick without provocation and then kicked him while he was down. Hill suggested that Ferguson “cursed his ‘sowl’ [sic]” and said he’d throw him down a well.

After this, the Whig suggests, Hill testified that Samuel said he would be going to the Fergusons to see “why my brother was beaten.”

The Belfast Telegraph gives a different account, suggesting instead that the incident started at nine o’clock, when the Duffields interrupted the Fergusons while they were assaulting “Spence” (presumably Samuel Spence named in the Whig article). As a result of their interference, the Duffields were assaulted by both Fergusons and the preceding incident resulted in the visit to the Ferguson house.

Either way, the evidence suggests the evening ended with the Duffields at the Ferguson house where a number of assaults occurred.

The articles reference two members of the Duffield family—James Duffield (described as the father) and Samuel (the son). I believe Samuel to be my 3x great-grandfather. Although the articles don’t specifically note the age of Samuel, it is implied that he is younger, and my Samuel would have been about 21 in 1878. Although the articles reference “James” as opposed to my 4th great-grandfather, “John,” I believe that there is a match. I know that my John’s father was named James, which suggests that he may have been “James John” and gone by “John.” The other information (below) provides more support for a match for my family.

All of the parties “lived close to each other at Colin View, off the Lisburn Road.” According to an 1877 Belfast Street directory, my John and Samuel Duffield lived off Lisburn Road in 1877.

The same directory lists Thomas Ferguson at 107 Colinview (the same address listed in the article). The article also lists Thomas as a “dairyman” – which links his occupation with my John Duffield, who was also a dairyman.

Further, the articles reference a William Megaw (or McGaw in the Belfast Telegraph), which is the name of my 5th great-grandfather, (but may in this case may also be his son or another relative).

Robert James Hill is also named. Robert James Hill married Samuel’s sister, Margaret. A slight hitch, two of the articles suggest that Samuel said he would be going to the Fergusons to see “why my brother was beaten.” This statement gave me some pause, as Robert James Hill didn’t marry Margaret Duffield until over a year after the incident, on September 9, 1879. Samuel and James were not brothers-in-law at the time of the incident. My supposition is that Margaret and James may have been affianced at the time, or that the two families (Hill and Duffield) were very close. However, the fact that Hill is referred to as a “brother” by Duffield does suggest again that it is indeed my 3x great grandfather and not an older uncle or other relative.

Below is a transcription of the Freeman’s Journal article:

Today, at the Belfast Police court, before Mr. Orme, R.M., a case of assault occuring on the evening of the 12th July was heard. All the partices tonnected with it lived close to each other at Colin View, off the Lisburn-road. Thomas Ferguson, sen, and Thomas Ferguson, junior, summoned James Duffield, Samuel Duffield, William Megaw, James Hill, Thomas Hill, Samuel Spence, and Hector Lennox for committing an assault on the complainant, Thomas Ferguson, sen, by entering the complainant’s premises in a hostile manner, brandishing a stick in his face, and threatening to beat him and his two sons. A cross case was entered by the hills and Duffields against the Fergusons. Upwards of twenty witnesses were examined. Their evidence went to show that a general row occurred in Ferguson’s house, in which a number of assaults were committed. After a very lengthened hearing, Mr. Orme said there was no doubt that the Duffields were the principal parties in the row by going to the Ferguson’s house. He fined them 40s each. A similar penalty on Robert and Thomas Ferguson, sen. and 20 s each on Ferguson, jun, and the Hills.

Below is a transcription of the Northern Whig article:

THE JULY CELEBRATIONS – AN ASSAULT CASE

This was a case of assault, which occurred on the evening of “The Twelfth.” All the parties connected with it lived close to each other at Colin View, off the Lisburn Road. Thomas Ferguson, sen., and Thomas Ferguson, jun., summoned James Duffield, Samuel Duffield, William Megaw, James Hill, Thomas Hill, Samuel Spence, and Hector Lennox for committing an assault on the complainant, Thomas Ferguson, senior, by entering the complainant’s premises in a hostile manner, brandishing a stick in his face, and threatening to beat him and his two sons. Cross cases were entered by the Hills and Duffields against the Fergusons. Mr. Harper and Mr. M’Erlean represented the Fergusons, and Mr. Sheals and Mr. Ward appeared for the other parties. Upwards of twenty witnesses were examined. Their evidence went to show that a general row occurred in Ferguson’s house, in which a number of assaults were committed.

The following was given amongst other evidence: —

Thomas Ferguson, jun, said that Duffield, sen., knocked at his house at eleven and pushed in, stating that he could beat witness’s father, with his two sons as well. This individual, witness explained, was quite a “buffer,” whatever that meant, and was able for “all” on the Lisburn Road, old or young.

Mr. ORME – Stand aside there. Show me that fellow. I’d like to see him. (Laughter.)

[Duffield then stood up for the benefit of his Worship and the crowded court, whose united gaze he met with a complacent smile.]

To Mr. HARPER – The well in question is Ferguson’s. The Fergusons live two fields from the Duffields. The latter came out and in regularly of my house. I saw Samuel Duffield entering the Ferguson’s. The pailing of the latter’s house was broken some months since. I did not see any of the pailings broken on the 12th. Samuel Duffield said to me, “I am going over to Ferguson’s to see why my brother was beaten.” He did not say he wanted satisfaction.

Mr. ORME – What business had he at Duffield’s house at all?

Witness – It is a curious thing if a person cannot enter a neighbour’s house without being interfered with. There was a row at Ferguson’s door before Samuel went to it.

The witness was cross-examined by Mr. M’ERLEAN – You were at Lambeg? – Yes. Did you get any drink there? – No. Was it arranged at Lambeg that this man’s house was to be wrecked? – I don’t know.

By Mr. SHEALS – Was it you instructed Mr. M’Erlean to bring Lambeg into this case? – No. Do you want it to appear that these parties came from Lambeg purposely to attack your house? – I do.

Mr. SHEALS – I really cannot get on with these interruptions.

Mr. Harper, addressing the Court for the Fergusons, said that the latter were quietly in their own houses when the other parties attacked it and beat them.

Mr. WARD contended that his clients were violently beaten by the Fergusons without provocation.

Mr. ORME said he had very great difficulty in deciding so very complicated a case. There was no doubt that the Duffields were the principal parties in the row by going to Ferguson’s house. He fined them 40s each ; a similar penalty on Robert and Thomas Ferguson, sen.’ And 20s each of Ferguson, jun., and the Hills.”

Below is a transcription of the Belfast Chronicle article:

Samuel Duffield, James Duffield, William McGaw [sic.], James Hill, and Robert J. Hill, were summoned by Thomas Ferguson, sen. and Thomas Ferguson, jun., for assaulting them on the night of the 12th instant. There were also cross cases at the suit of the Fergusons and the complainants. Messrs. Harper and McErlean appeared for the Fergusons and Messrs. Sheals and Ward for the Duffields. From the evidence it appeared that about nine o’clock in the evening in question the Duffields saw the younger Ferguson beating a boy named Spence. They interfered to prevent them doing so, and were then assaulted by both Fergusons. At a later hour of the night Samuel Duffield went to Ferguson’s house, and asked why they had assaulted his brother. A general melee ensued, in which James Duffield, William McGaw, Thos. Hill, and Robert F. Hill assaulted the Fergusons. The bench fined Samuel Duffield, James Duffield, and William McGaw 40s and costs; Thos. Hill and Robert Hill, 20s and costs; Thomas Ferguson, sen. and Thomas Ferguson, jun., 40s and costs.

After being discharged from the Canadian Expeditionary Forces, John James Joseph “Jack” McPhail married Annie George. The couple had five children together. END_OF_DOCUMENT_TOKEN_TO_BE_REPLACED

William Alfred Webb married Louie Shepherd on December 31, 1904, in Bradford, Lancashire, England. They had five children, but only two survived to adulthood. END_OF_DOCUMENT_TOKEN_TO_BE_REPLACED

Isabella Griffin never married. She was the postmistress at the post office in Kingston Seymour, England. END_OF_DOCUMENT_TOKEN_TO_BE_REPLACED