When Did Mary Ann Whelan Die?

I found amongst my grandmother's photo collection the obituary for her mother. I knew she died in 1957 (as I've got a record of the grave site), but wasn't clear on the actual date. 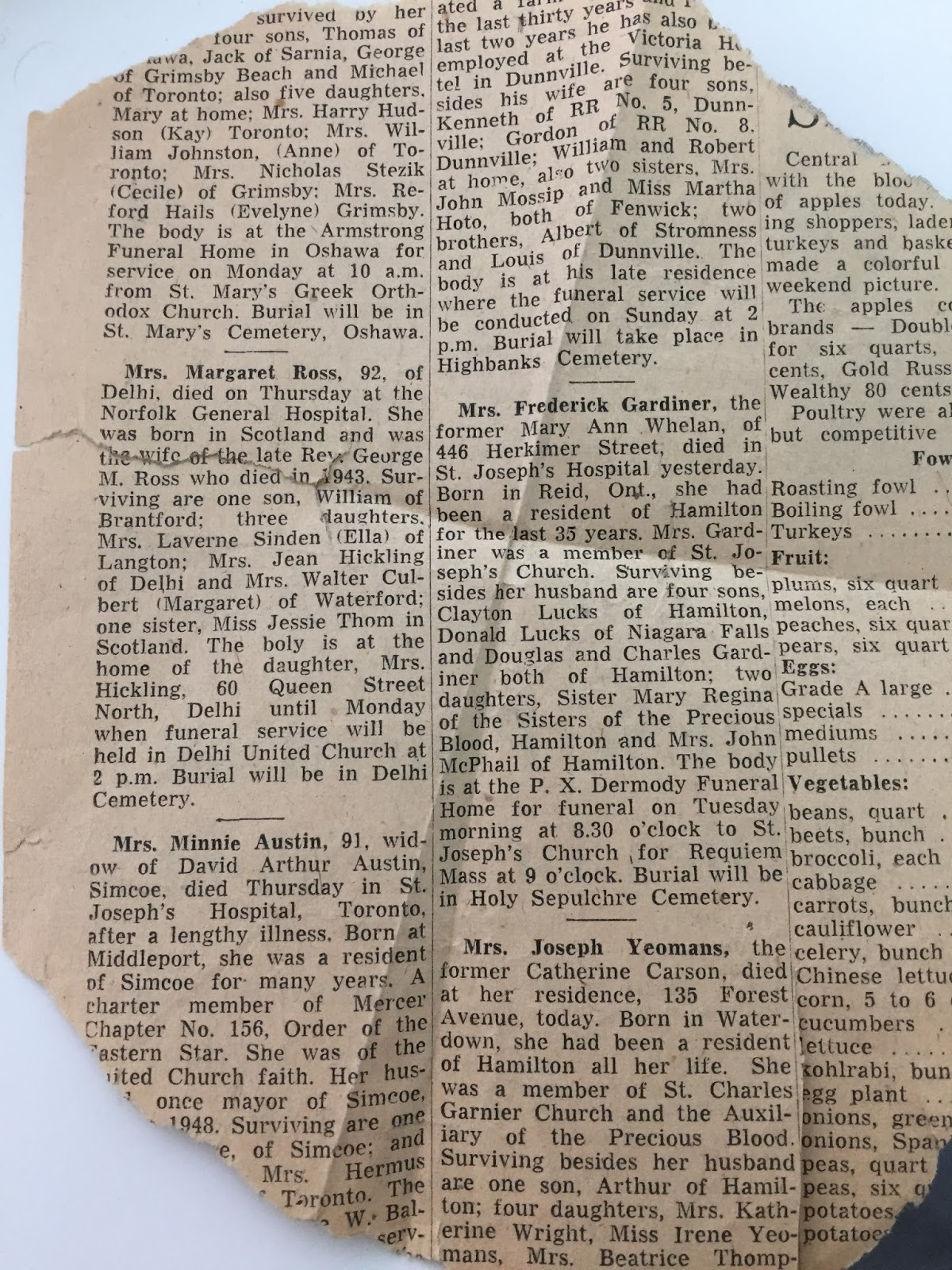 I found amongst my grandmother’s photo collection the obituary for her mother. I knew she died in 1957 (as I’ve got a record of the grave site), but several emails to the cemetery to determine the actual date of her death went unanswered.

Luckily, there are three other obituaries on the page. Unfortunately, those too provide no specific date of death. But I could use the information in those obituaries to at least narrow down the date.

I looked first for Mrs. Minnie Austin, because her obituary notes that her husband was once the Mayor of Simcoe and would hopefully be easier to find. According to the paper, she was 91 at the time of her death which would place her birth in 1865 or 1866, according to the article in Middleport, Ontario. I type that information into Ancestry.

Minnie Patterson married David Arthur Austin, a farmer in Woodhouse, Ontario on October 8, 1890, placing her birth in 1866. She was the daughter of John Patterson and Rebecca Grimshaw. They had at least three children (also cut off in the obituary and are found on the 1901 Census in Woodhouse: Clarence, Clayton and daughter Mary. By the 1911 Census, David is working in a Machine Shop and the family is living on Colborne Street in Simcoe. The 1921 Census shows David (Arthur on this census) and Minnie with son Clarence and his wife Victoria living at 99 Union Street. David and Clarence’s occupations are “undertaker.”

Minnie is buried with her husband in Oakwood Cemetery in Simcoe, Norfolk Ontario. There is no picture of the site, but FindaGrave confirms her children were Clarence Arthur Austin (1894-1960) and Clayton Alvin Austin (1896-1936). Her husband was born September 7, 1866 and died in 1948 (which is cut off in the article). But of course, her death date is just noted as 1957, with no specific date.

An Ancestry User traces her death to July 8, 1957 – but there is no specific record confirming the date. Another Ancestry user has attached a death for a Minnie Paterson dated July 8, 1935. This is the wrong Minnie Patterson – but suggests that the July 8th date was likely incorrectly attributed (as well, July 8 was a Monday and the obituary says she died on a Thursday). And there’s my brick wall. So on to the next obituary.

Margaret Ross, the wife of the late Rev. George M. Ross died “Thursday” at Norfolk General Hospital at the age of 92, placing her birth (in Scotland) in about 1865. Her husband died in 1943. She had one son, William, and three daughters, Ella, Jean? and Margaret. Her sister (luckily unmarried, giving us the maiden name) was Miss Jessie Thom.

I look for her husband first, typing in his name and date of birth. Great move—I discover that the Rev. George’s death certificate is on Ancestry, and now I have his date of birth, November 24, 1863 and death on May 11, 1943. No other helpful records have been found.

An Ancestry user suggests that Margaret (Thom) Ross died on October 10, 1957 – but no source of the information is provided. However, October 10th was a Thursday. It still doesn’t tell me what date my great-grandmother died (“yesterday”), but at least tells me that it wasn’t on a Thursday and Thursday wasn’t yesterday. So my grandmother must have died on Sunday, Monday, Tuesday, Wednesday or Friday.

Catherine Carson’s obituary does not give us a birth date, but gives us the names of three family members: Arthur (her husband) and her daughters Katherine, Irene and Beatrice.It also tells us that Catherine was born in Waterdown, Ontario and lived in the Hamilton area her entire life.

I’ve been unable to conclusively determine when she died, but…I can poke back to the July and October 1957 papers at the library and see if I can find the obituary. That will be my next stop.

Samuel Dutton, son of Edward Dutton, married Emma Podmore in Warrington, England. The couple emigrated to Canada and had one daughter. END_OF_DOCUMENT_TOKEN_TO_BE_REPLACED