Alice Webb married Charles Edmund Truscott on June 28, 1911, in Wentworth, Ontario, Canada when she was 20 years old. The couple had no children. 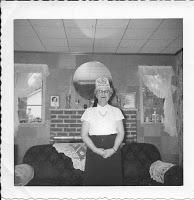 Alice emigrated with her parents and several of her siblings (she had five brothers and three sisters) to Canada between 1903-1904.

Alice married Charles Edmund Truscott on June 28, 1911, in Wentworth, Ontario, Canada when she was 20 years old.

On the 1911 Canadian census, just prior to the marriage, Alice is living with her parents at 85 Wellington Street North in Hamilton. At the time, Charlie is still living with family.

Although the couple does not appear in the 1911-1913 directories (possibly they’re living with family), we find Charles listed as living at 102 Cheever Street in the 1915 Vernon’s City of Hamilton Directory. The 1916 Directory lists him at 90 Bellview Avenue, Hamilton (this address doesn’t show up on Google Maps).

I wasn’t able to identify the couple on the 1921 Canadian Census.

In 1923, Charlie went to Flint, Michigan, through Detroit, followed by Alice in 1924. The Detroit border crossing for Charlie seems to suggest that he was missing fingers.

The couple are listed in the 1930 American census with Charlie’s job, a Diemaker living at 2101 Mackin Road in Flint.

The couple also appears at the same address on the 1940 American Census. Charles is now a foreman at the Chevrolet plant.

The couple is still living at the same address in 1942 when Charles filled out draft papers.

The 1945 Directory for Flint shows the couple living at 557 Welch Avenue.

A social security claim is filed by Charles on January 2, 1953. A relative recalls that the couple maintained a house in Hamilton as well as Michigan. Possibly Alice lived mostly in Hamilton while Charles travelled. Records suggest that Charles died on November 28, 1962, at the age of 74 in Flint, Michigan and Alice died there ten years later on March 15, 1972, at the age of 81.

The couple are buried in a mausoleum in Flint Memorial Park, in Flint Michigan.

After being discharged from the Canadian Expeditionary Forces, John James Joseph “Jack” McPhail married Annie George. The couple had five children together. END_OF_DOCUMENT_TOKEN_TO_BE_REPLACED

William Alfred Webb married Louie Shepherd on December 31, 1904, in Bradford, Lancashire, England. They had five children, but only two survived to adulthood. END_OF_DOCUMENT_TOKEN_TO_BE_REPLACED

Isabella Griffin never married. She was the postmistress at the post office in Kingston Seymour, England. END_OF_DOCUMENT_TOKEN_TO_BE_REPLACED