Sarah Gardiner's prospects were bright. Although she didn't marry, she trained to be a schoolmistress. Sadly, her life was tragically interrupted after a bike ride in September 1902. 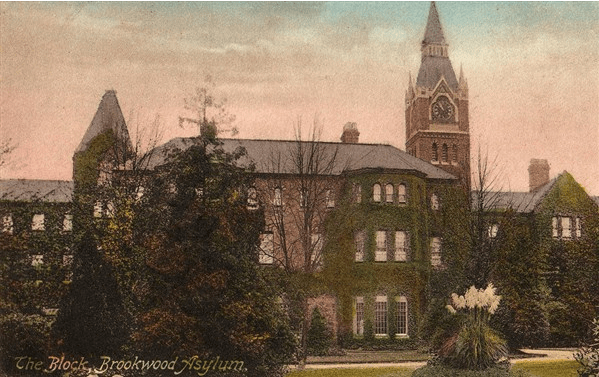 After her father’s death in 1888, we find Sarah living with her mother, one of her brothers and her unmarried sisters at 3 Hillside Road in Lambeth on the 1891 Census. Her mother Catharine, a widow at age 57, is living on her own means. Sarah (23) is a kindergarten teacher.  It is around this time that Sarah and/or her sisters open a “Hillside School” out of that address.

We next find the family in 1901, we find mother Catharine (66) with Rose (37) and Sarah (33) (both schoolmistresses) and Amy (32), an artist and sculptor still on Hillside Road. Also in the home is a servant and three very young borders, likely students of Hillside School. Her future looks rosy – but it all changes in September of that year. On September 23, 1901, we find Sarah admitted from Hoxton House to Bethlem Asylum. The paperwork suggests that she “was strange on September 2nd when she said that someone had maliciously punctured her bicycle tyre [ibid.] …rapidly developed great restlessness and…delusions, as that her food was tampered with, mistaking identities; transitory losses of memory.” The paperwork suggests “she is depressed and constantly endeavouring to injure herself by tearing out her hair and biting her hands and arms.” Her sister Rose provided evidence that Sarah had paranoid delusions, and a letter from her mother Catharine is in the file. 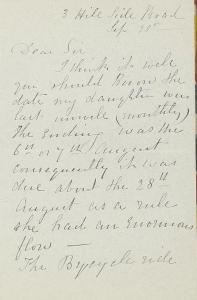 The paperwork also provides a good physical description of Sarah, who was apparently in good health otherwise:

It is said that she is “quite cognisant that she has been maniacal,” and “she is reticent about the cause of her attack but it can be elicited that she has been attached to a man that it has preyed on her mind.” The notes of Sarah’s stay suggest she was quite restless and sometimes hysterical, attempting on a few occasions to injure herself. Two months in:

“her…last manaical attack passed off she now sleeps in observation…she is very thin and has aged much since she came in…she varies between depression and escallation.”

Sarah is discharged in January 1902, but next spends time at the Cane Hill Asylum as a private patient between February and August. She’s admitted again, this time to Brockwood Hospital in Woking on April 30, 1903. The notes during this period suggest she had a sharp decline.

The remarks seem to suggest that she was what would be called manic depressive today, with suicidal tendencies. Sadly, Sarah Gardiner’s death is recorded on August 28, 1903. The cause of death is recorded as exhaustion from melancholia. She is buried in the family plot at Nunhead Cemetery. Main image: Brockwood Asylum (image via Wikimedia)

More About My Dutton and Webb Family

Samuel Dutton, son of Edward Dutton, married Emma Podmore in Warrington, England. The couple emigrated to Canada and had one daughter. END_OF_DOCUMENT_TOKEN_TO_BE_REPLACED