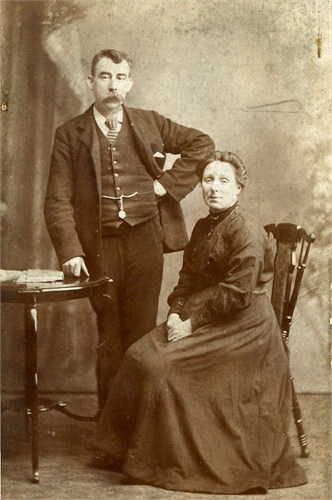 Albert Jones was born on March 26, 1867 in Crewe, Cheshire, England, son of John Jones. At the time of the marriage, John is a Boiler Maker and has worked with the railroad since the young age of 13. This is possibly how he was introduced to Rosina, whose family has a number of railway employees including her father and grandfather.

Rosina and Albert had nine children over the next 18 years:

Wilmot is captured with the couple on the 1891 census at 74 Chetwode Street in Crewe. This is likely one of the few records of him as he died shortly after the census within a year of his birth.

No baptismal records have been identified for any of the children, but based on the birth registration index, Rosina was likely pregnant with Maggie at the time of the 1891 census. Her birth is followed by Minnie (1894), Alice (1896), Christina (1898) and Albert Jr. (1900). We find them all at 22 Oak Street in Crewe on the 1901 census. If there was a home there, it’s been replaced by a parking lot.

On the 1939 Register, the couple is living at 168 Market Street in Crewe (which is also now a parking lot). Albert is retired. There is another person living in the household, but that record is still closed.

Samuel Dutton, son of Edward Dutton, married Emma Podmore in Warrington, England. The couple emigrated to Canada and had one daughter. END_OF_DOCUMENT_TOKEN_TO_BE_REPLACED