I haven't been able to locate a marriage record for Mary Elizabeth Webb and her "husband" William Beswick, but they had five known children. 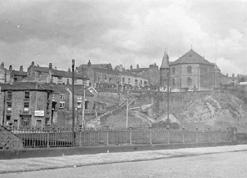 When Mary Elizabeth (Polly) Webb was born on November 18, 1881, in Stalybridge, Lancashire, England, her father, William Richard Webb, was 22, and her mother, Elizabeth (née Dutton), was 22. She was baptized at New St. George Church in Stalybridge on February 4, 1882. Polly had five brothers and three sisters.

I have not located a marriage certificate for Polly. When I originally created this post*, the only document I had for marriage reference was an Ontario birth registration for her son, Herbert. The record, created in 1926, indicates that Polly married William Beswick on June 19, 1896, in Oldham, Lancashire, England. However, Polly would have only been 14 at that time. As well, Polly appears as a witness to her sister Lily’s marriage with her maiden name (Mary Elizabeth Webb) in 1899, but the marriage was five months after the supposed birth of Polly’s first son in 1898 in Kingston, Ontario, Canada.

Since the original post, Ancestry user NevilleBennett has posted the birth registration for Herbert Beswick on Ancestry. The English record suggests that Herbert was actually born in Oldham, England on December 28, 1900 (two years later than the Canadian record suggests, but on the same day). It’s likely that the Canadian record was created so that Herbert could enter the military before he was of age. The couple is living at 23 Glodwick Road in Oldham and William’s occupation is “dataller” – a person whose job was to see that coal reach the shaft and was sent to the surface.

I still have not located a record indicating where, when (or if) Polly actually married William Beswick. Presumably, now knowing that the couple lived in England until at least 1905, it would have happened there, but there is no record in the registry that I could find.

The family has not been located on the 1901 England Census (there is another family living at the address listed on Herbert’s birth registration).

A May 19, 1905, crossing of the Allan Line ship Virginian lists William arriving in Quebec, followed by a July 27, 1905 crossing of the Allan Line ship Bavarian with Polly and four-year-old Herbert as passengers. They arrived in Montreal on August 5, 1905. We find another reference in 1905 the U.S., Index to Alien Arrivals at Canadian Atlantic and Pacific Seaports, 1904-1944 which confirms the couple arrived in Canada in 1905.

The family is also not located on the 1911 Canadian census.

Samuel Edwin Beswick was born in 1912 at 23 Cathcart Street in Hamilton, Ontario (the house no longer exists). The attending physician for the birth is listed as Elizabeth Bagshaw (one of Canada’s first female doctors).

On October 8, 1915, Polly gave birth to an unnamed male child in St. Catharines, Ontario. The child was stillborn and the only record identified is a death record.

On May 6, 1920, Polly gave birth to two boys, twins, that she named William and Richard Beswick. The only record found for the boys is, unfortunately, a death record, as they died on May 7th. It appears that they were born prematurely. The boys are born at home at 400 King Street in London. They are buried at Woodland Cemetery in London.

On the 1921 Canadian Census, the family appears to be living in London, Ontario, Canada with William’s mother, Ann at 400 King Street (the area is now several large apartment buildings).

The next record we find is the American census in 1940 showing William and Polly living with their two grandsons, Harry and William (mistakenly listed as their sons) at 1004 Elm Street, a rented dwelling in Hopewell, Virginia. The record suggests they moved there in 1935.

Polly died almost ten years later on March 27, 1962, in Virginia. Interestingly, it appears that it was not one of her family members who informed her obituary, as her husband is mistakenly noted as “Herbert” Beswick (not William), and her sister Alice is noted as her daughter (which took me for a minute, but Polly would have been 11 when Alice was born, so that seems incredibly unlikely). At the time of her death, Polly was living at 5721 Grosvenor Lane, which is currently a health centre in Bethesda, Maryland, and was possibly a hospital at the time of her death. I’ve found no corresponding obituary in a Maryland paper.

Samuel Dutton, son of Edward Dutton, married Emma Podmore in Warrington, England. The couple emigrated to Canada and had one daughter. END_OF_DOCUMENT_TOKEN_TO_BE_REPLACED