Given his qualifications as a mechanic, Archie enlisted on January 10, 1941 (during WWII) in the Royal Hamilton Light Infantry (the Rileys). 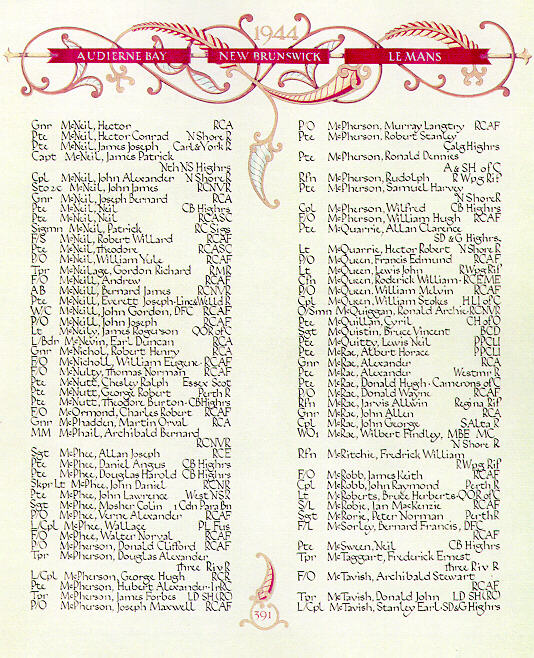 Archie Jr. and Reta had one daughter (not named due to potential privacy concerns.)

Given his qualifications as a mechanic, Archie enlisted on January 10, 1941 (during WWII) in the Royal Hamilton Light Infantry (the Rileys). He was not married at this time, just prior to his parents deaths later that year.

Archie eventually enlisted with the Royal Canadian Navy Volunteer Reserve on July 24, 1942. At the time, he was married and was living with his wife at 67 Wexford Avenue South in Hamilton and he was working as a mechanic at City Chevrolet.

He eventually became a stoker for the HMCS Star. According to Wikipedia, between 1941 and 1945, HMCS Star enlisted and trained 7,490 officers, men, and women for service during the Second World War. The Star is currently docked in Hamilton at a National Historic Site.

He served aboard various ships in the fleet during his service, including the HMCS Cornwallis, Stadacona, Protecteur, Hochelaga, Venture and Chaleur II.

It was aboard the HMCS Chaleur II (click link for a photo of the crew) that Archie met his untimely death on September 7, 1944.  His commanding officer’s report indicates there was a large explosion that day, while the ship was at the naval base in Gaspe, Quebec.

At the time of Archie’s death, Reta (and presumably Jeanette) were living at 1377 Main Street East, Hamilton (there is no longer a home at this address). After his death, Reta (and presumably Jeanette) moved in with a relative (Miss F. Jones) at 66 Beland Avenue (unknown whether this was North or South). The paperwork reflects that Reta was remarried at some point around 1948 to a man named Shelist and at that time was living at 1125 King Street East.

Archie’s name is listed on page 391 of the Second World War Book of Remembrance.

His obituary, dated September 9, 1944 in the Hamilton Spectator reads:

The September 23, 1944 edition of the Lethbridge Herald indicates that Robert White, a Signalman, was killed around the same time. A review of Robert White’s military files indicate that he was killed in Scotland on the same day, but obviously not in the same incident. 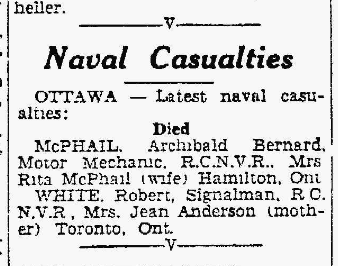 Bernard Shellist was named Borys at birth. Records suggest he was born in Hyrciwola, Galicia, Poland, the son of Stefan Shelist (1877-1944) and Anna Tyndiuk (1889-1951). He emigrated with his parents to Canada at the age of six.

Records suggest that Rita was a vocalist, who started as a soprano in the church choir. Bernie coached her and developed her range to encompass and include Jazz and Big Band lead singer styles.

The couple emigrated to California in the fifties, becoming naturalized citizens in 1961. They had three children (not named due to privacy concerns).

Divorce records in California suggest that Rita and Bernard filed for divorce in 1968 and 1975, but other records suggest that they “shared a love of music until the end of their days.”

Rita died of congestive heart failure on May 11, 2003, in San Diego, California. Her obituary suggests she was “She was a mother of four, grandmother of eight and great- grandmother of fifteen.”

The Bernie and Rita Shellist Music Endowed Scholarship was created by one of the couple’s children and is for a student whose goal is to become a professional musician.

After being discharged from the Canadian Expeditionary Forces, John James Joseph “Jack” McPhail married Annie George. The couple had five children together. END_OF_DOCUMENT_TOKEN_TO_BE_REPLACED

William Alfred Webb married Louie Shepherd on December 31, 1904, in Bradford, Lancashire, England. They had five children, but only two survived to adulthood. END_OF_DOCUMENT_TOKEN_TO_BE_REPLACED

Isabella Griffin never married. She was the postmistress at the post office in Kingston Seymour, England. END_OF_DOCUMENT_TOKEN_TO_BE_REPLACED